“This Land Is Your Land” is one of the United States’ most famous folk songs. The lyrics were written by Woody Guthrie in 1940 based on an existing melody, in critical response to Irving Berlin’s “God Bless America,” which Guthrie considered unrealistic and complacent. He originally called it “God Blessed America for Me.”

Guthrie varied the lyrics over time and recorded it in 1944. The song was not published until 1951, when it was included in a mimeographed booklet of ten songs with typed lyrics and hand drawings.

In 2002, it was one of 50 recordings chosen that year by the Library of Congress to be added to the National Recording Registry. [From Wikipedia]

From California, to the New York Island

From the redwood forest, to the gulf stream waters

This land was made for you and me

As I was walking a ribbon of highway

I saw above me an endless skyway

I saw below me a golden valley

This land was made for you and me

The two verses often left out:

As I went walking I saw a sign there

But on the other side it didn’t say nothing,

That side was made for you and me.

In the shadow of the steeple I saw my people,

By the relief office I seen my people;

Is this land made for you and me? 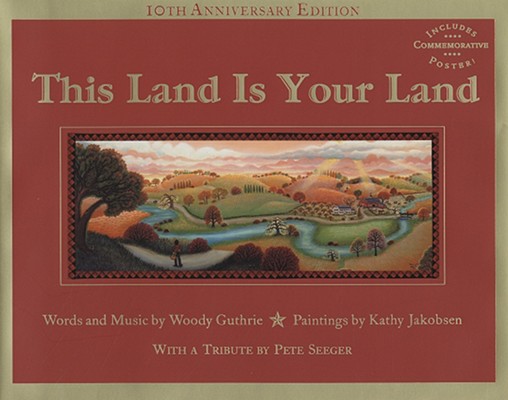 3 comments on “This Land is Your Land”