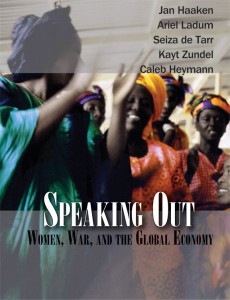 Speaking Out addresses the effects of war on gender and reparation in a five-part, interactive curriculum that is adaptable for differing educational levels, from secondary schooling to college. Based on the documentary Diamonds, Guns, and Rice, this curriculum bridges the local and the global, placing gripping personal stories in an international landscape and highlighting the creative capacities that survive war. The relevance of such lessons in today’s world proves invaluable as we ask the questions: Who are the victims of war? What are the effects of war? How are these effects overcome?

Speaking Out grew from an international peace project addressing issues of war from the personal effects of combat to institutional factors shaping armed conflicts. Stories, games, and role-playing are interwoven with lessons on colonialism, West African agricultural economy, international banking, diamond and arms trades, and peace-building projects. A copy of Diamonds, Guns, and Rice accompanies this book, providing the reader with a visual and deeply moving journey into these women’s lives.

Review of the guide from Rethinking Schools by Jeff Edmundson

Groups of student “diamond workers” are clustered around an egg-carton game board, shifting the pieces — representing diamonds — from bowl to bowl. In the simulation, rooted in a traditional African game, students carefully devise strategies for the shifts, trying to get the most pieces in a larger end bowl. Finally, the victorious student draws a “penalty card” replicating a real-world event, such as being attacked by rebels and losing half of her diamonds; the student then is told that most of her remaining diamonds are owned by a diamond cartel partner, who gains almost all of the profit from the worker’s effort. Debriefing, students respond to the injustice and look at the system that creates it. Thus are students introduced to the global diamond trade.

This lesson comes from a new film and curriculum for high school and college students. The film, Diamonds, Guns and Rice, and the curriculum, Speaking Out, use the 1990s civil war in Sierra Leone to explore broader issues such as cross-cultural awareness, the global trade in diamonds and guns, and the effects of war on women. Given the paucity of material on contemporary Africa, let alone on women or globalization, the package is a welcome contribution.

The 1991-1999 civil war in Sierra Leone, like the related war in neighboring Liberia, was not so much a classic revolution against oppression as it was a multi-sided struggle for power that often degenerated into brutal terrorism. As in other recent wars, many children became soldiers — some through kidnapping, others because they were attracted to the power of being with an armed force. As the curriculum notes, “Since youths played such a leading role in the Sierra Leonean civil war, including carrying out atrocities in their own villages, post-conflict interventions have focused heavily on the young.” But where most efforts are directed toward male combatants, Speaking Out looks at the “daunting barriers faced by girl combatants in the aftermath of the civil war.”

The film has three sections: “Rice,” which looks at the role of both rice and women in Sierra Leonean culture; “Guns and Diamonds,” which gives an overview of the war, its causes and its horrendous effects; and “Peace,” which explores the efforts to reintegrate child soldiers after the war. Read more.

One comment on “Speaking Out: Women, War and the Global Economy”