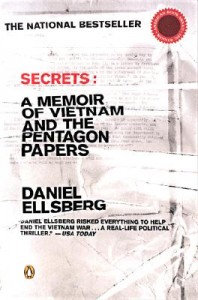 In 1971 former Cold War hard-liner Daniel Ellsberg made history by releasing the Pentagon Papers — a 7,000-page top-secret study of U.S. decision-making in Vietnam — to the New York Times and Washington Post. The document set in motion a chain of events that helped end not only the Nixon presidency but the Vietnam War. In this memoir, Ellsberg describes in dramatic detail the two years he spent in Vietnam as a U.S. State Department observer, and how he came to risk his career and freedom to expose the deceptions and delusions that shaped three decades of American foreign policy. [Publisher’s description.]

“A real-life political thriller” (USA Today) from the man who toppled a president and helped end the Vietnam War.”

One comment on “Secrets: A Memoir of Vietnam and the Pentagon Papers”