Round and Round Together: Taking a Merry-Go-Round Ride Into the Civil Rights Movement, written for middle and high school students, tells the story of the Gwynn Oak Amusement Park protests.

During the week of July 4-7, 1963, hundreds of people gathered at Gwynn Oak Amusement Park for a non-violent protest against its segregation. Nearly 400 were arrested and the attention of the nation was soon focused on this injustice occurring in Baltimore, Maryland.

Protests to desegregate Gywnn Oak began as early as 1955 (a year after the Brown vs. Board of Education decision), particularly on “All Nations Day” in September, when embassies were invited to show their culture. African nations were excluded. However, the early protests failed to attract much attention.

In 1962, protesters convinced the embassies not to attend as the struggle over Gwynn Oak garnered more attention and the protests became more organized. In 1963, groups including CORE, CIG (Civic Interest Group), the NAACP, and NCC (National Council of Churches) joined forces. The protests united students, community leaders and activists along with various churches and synagogues. These groups decided to make July 4, 1963 — the 187th anniversary of the adoption of the Declaration of Independence — a day of mass protests at Gwynn Oak, publicizing it ahead of time. Large numbers of people came from the Metropolitan United Methodist Church on buses and drove from cities like New York, Philadelphia, and Washington, D.C. Several hundred demonstrators arrived at the park, many singing patriotic songs.

Protesters were beaten and jailed, as recalled in the video below.

On August 28, 1963, segregation ended at Gwynn Oak Amusement Park, after nearly a decade of bitter protests. Eleven-month-old Sharon Langley was the first African American child to go on a ride there that day, taking a spin on the park’s merry-go-round, which since 1981 has been located on the National Mall in front of the Smithsonian Institution in Washington, D.C. [Description from Paul Dry Books and the Baltimore Sun Darkroom.]

“Round and Round Together tells the inspiring story of how a generation of college and high school students provided the energy and enthusiasm that ended racial segregation in Baltimore’s Gwynn Oak Amusement Park and changed the direction of Maryland’s history.” —James Henretta, professor emeritus, University of Maryland

“With clarity and passion, Amy Nathan portrays the struggle of everyday citizens to end racial segregation in Baltimore. This compelling history, for and about young people, is simple but profound like freedom itself.” —Taylor Branch, author of the trilogy America in the King Years

Amy Nathan is also the author of another non-fiction title for middle school on an important story in the history of the Civil Rights Movement, Take a Seat—Make a Stand: A Hero in the Family: The Story of Sarah Key Evans, a Civil Rights Hero Who Would Not Be Moved.

Watch the documentary All the King’s Horses: The Story of Gwynn Oak Amusement Park by Beverly and Pete O’Neal.

Read the first chapter of Round and Round Together online for free.

“Merry-Go-Round,” a song written by Joe DeFilippo and performed by the R. J. Phillips Band, a group of Baltimore studio musicians. 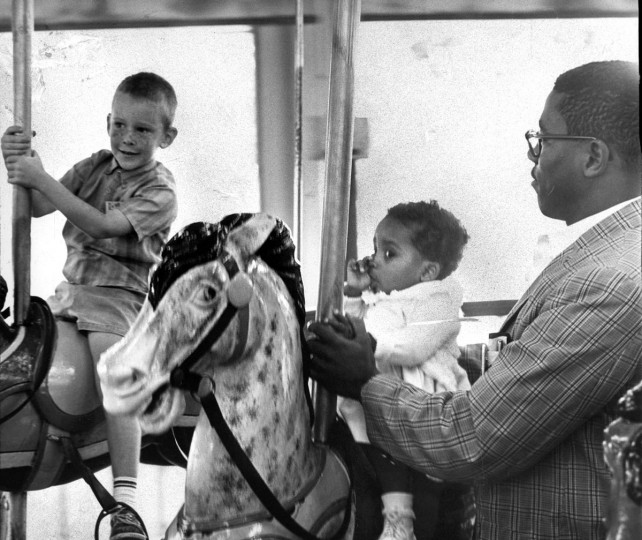