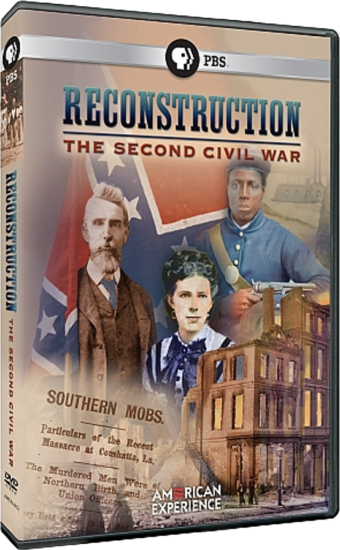 PBS’s Reconstruction: The Second Civil War is one of the few useful documentaries for those teaching the Reconstruction era. In addition to the common narrative of President Andrew Johnson’s battle with the Radical Republicans in Congress — most notable Thaddeus Stevens, who is featured prominently in the film — the documentary also uses the stories of several other lesser-known Americans to tell the tale of Reconstruction from different perspectives.

Through the voices of several historians, including Eric Foner, and dramatic re-enactments by actors, Reconstruction follows the stories of Kate Stone, whose family owned a large cotton plantation and enslaved over 150 people before the war; Marshall Twitchell, a former Union soldier who becomes a Freedmen’s Bureau agent in one of the most violent corner’s of Louisiana; John Roy Lynch, a former slave who became a U.S. congressman for the state of Mississippi; Frances Butler, the daughter of a Georgia plantation owner; and, most compellingly, Tunis Campbell, a Black abolitionist who builds an independent colony for freedmen and women in Georgia’s Sea Islands before being elected to Georgia’s state senate.

While the documentary leaves out many other important Reconstruction era stories and suffers from its attempt at providing “balance” (note the two narratives of former slaves are “balanced” by two narratives of former slave owners), by constructing the time period from the perspectives of ordinary citizens it paints a much more expansive and comprehensive picture than most textbook accounts.

The documentary is split into two parts which total three hours long, so it would be difficult to use in its entirety in the classroom. However, Reconstruction is full of short segments — whether it’s the battles in D.C., the multiracial legislatures in the South, or the various massacres attempting to reestablish white supremacy — that can enrich a classroom narrative of the time period. In particular, the segments on Tunis Campbell and the separatist democracy he helped build in the Georgia Sea Islands give an unparalleled visual to both the promise and disappointments of land distribution and economic independence for freedmen and women during Reconstruction.