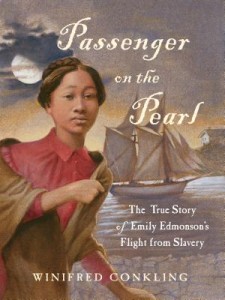 In 1848, 77 people in Washington, D.C., made a brave and carefully planned escape from slavery. They boarded a schooner called The Pearl to sail north to freedom in what became known as the Pearl Incident.

In Passenger on the Pearl: The True Story of Emily Edmonson’s Flight from Slavery, Conklin tells this history through the story of one passenger, teenager Emily Edmonson. Starting with Emily’s mother, who grew up in slavery and gave birth to Emily and her siblings under those horrendous circumstances, Conklin conveys the searing horrors of slavery and the measures people took to escape.

Throughout the book, Conklin includes background for key terms and issues, including the debate among abolitionists about buying an individual’s — such as Emily’s — freedom when those same funds were needed to fight slavery as an institution. As in her other book of historical fiction, Sylvia & Aki, Conklin makes a vital story and scholarly research accessible and gripping for young adult readers. [Description from Rethinking Schools.]