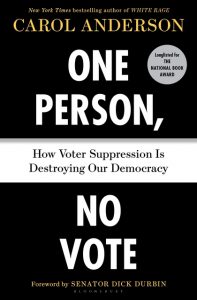 In One Person, No Vote, Carol Anderson chronicles a related history: the rollbacks to African American participation in the vote since the 2013 Supreme Court decision that eviscerated the Voting Rights Act of 1965. Known as the Shelby ruling, this decision effectively allowed districts with a demonstrated history of racial discrimination to change voting requirements without approval from the Department of Justice.

Focusing on the aftermath of Shelby, Anderson follows the astonishing story of government-dictated racial discrimination unfolding before our very eyes as more and more states adopt voter suppression laws. In gripping, enlightening detail she explains how voter suppression works, from photo ID requirements to gerrymandering to poll closures. And with vivid characters, she explores the resistance: the organizing, activism, and court battles to restore the basic right to vote to all Americans. [Publisher’s description.]

As Carol Anderson makes clear in One Person, No Vote, the right to vote is under even greater assault today. For the sake of those who fought and died for it, it is up to all of us to insist that this most basic American right be protected. Reading this well-crafted book will arm you with the facts.
–  Senator Dick Durbin, from the One Person, Once Vote Forward

Anderson has a gift for illustrating how specific historical injustices have repercussive, detrimental influence on contemporary American life. . . . One Person, No Vote is history as old-fashioned, coldblooded jeremiad: a lamentation about American democracy in crisis. Throughout One Person, Anderson’s tone, at turns urgent and indignant, seems to arise from the ease with which she can document abundantly — via investigative journalism, popular history and historical scholarship — the GOP’s determined efforts to purge American citizens and cull and homogenize the electorate. — Walton Muyumba, Los Angeles Times