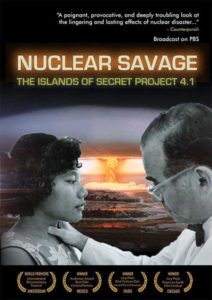 Nuclear Savage: The Islands of Secret Project 4.1 is a disturbing film that helps students grasp how U.S. nuclear testing in the Marshall Islands, beginning in 1946, “terrorized and traumatized” people there, in the words of a Marshallese government official. It’s hard to overstate the racism and depravity of U.S. officials who intentionally treated Marshallese — especially those from the island of Rongelap — as human guinea pigs.

In 1956, Merril Eisenbud, director of the U.S. Atomic Energy Agency’s health and safety laboratory, described the government’s plans for sending Marshallese back to Rongelap, just three years after the largest nuclear test in history: “That island is by far the most contaminated place on Earth and it will be very interesting to get a measure of human uptake when people live in a contaminated environment.” Eisenbud added, “While it is true that these people do not live the way Westerners do, civilized people, it is nevertheless also true that these people are more like us than the mice.” Nuclear Savage not only chronicles the experimentation on the Marshallese but also introduces us to individuals who continue to work for justice. It’s a film that needs to be a staple in U.S. and modern world history curricula. [Review by Rethinking Schools.]

Between 1946 and 1958 the United States tested 67 nuclear weapons above ground on or near Bikini and Enewetok atolls. One hydrogen bomb was 1000 times larger than the Hiroshima bomb. Entire islands were vaporized and populated islands were blanketed with fallout. As the film shows, the heavily exposed people of Rongelap were then enrolled as human subjects in the top-secret Project 4.1 and evacuated to a severely contaminated island to study the effects of eating radioactive food for nearly 30 years. Many of the Marshall Islanders developed cancers and had babies that were stillborn or with serious birth defects.

Nuclear Savage follows the islanders today as they continue to fight for justice and acknowledgement of what was done to them. Despite recent disclosures, the U.S. government continues to deny that the islanders were deliberately used as human guinea pigs. The film raises disturbing questions about racism, the U.S. government’s moral obligation to the people of the Marshall Islands, and why the government is continuing to cover up the intent of the tests and Project 4.1 after several decades. [Producer’s description]

One comment on “Nuclear Savage: The Islands of Secret Project 4.1”