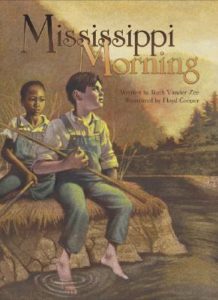 Piece by piece, James William’s comfortable life in 1933 Mississippi begins to unravel. First, he learns that the burning of a black man’s house was not accidental. Then his fishing buddy LeRoy tells him about the hanging tree and the Klan.

A thought-provoking story of one white boy’s loss of naïvete in the face of harsh historical realities, Mississippi Morning will challenge young readers to question their own assumptions and confront personal decisions. [Publisher’s description.]

“James, 12, lives in Mississippi in 1933. His father is influential in the community and owns a store in town. One day, a friend tells James that he overheard their dads discussing how a “colored preacher got what was coming to him.” James is also friends with LeRoy, an African-American boy, even though Pa feels that whites spending time with “colored folk” is not “natural.” When James suggests that they fish near a particular tree, LeRoy objects, explaining, “That’s where the Klan left a black man hangin’ for a whole day because he did something they didn’t like.” Then one morning, James’s faith and pride in his father are finally and painfully shattered when he sees him running home, carrying a rifle and wearing the white robes of the Klan. Cooper’s large, warm oil paintings create the perfect sense of time, place, and atmosphere. Special attention is paid to the facial expressions of the father and son whenever they appear together. The final illustration shows a tree with a frayed rope wound around its lower branches. A sad and poignant story about a period in American history, and on a more personal level, a son’s disillusionment.” —School Library Journal