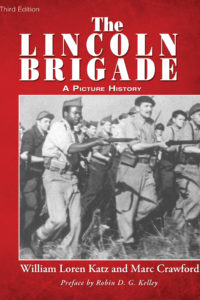 The day after Christmas, 1936, a group of 96 Americans sailed from New York to help Spain defend its democratic government against fascism. Ultimately, 2,800 United States volunteers reached Spain to become the Abraham Lincoln Brigade.

They were poets and blue-collar workers, professors and students, seamen and journalists, lawyers and painters, Christians and Jews, Blacks and whites. The Brigade was the first fully integrated United States army, and Oliver Law, an African American from Texas, was an early Lincoln commander. For the past fifteen years, I’ve taught a variety of 20th century history courses at the undergraduate and graduate level. And every year, without exception, one question stumps all of my students: “When did American soldiers first enter the Second World War?” “1941! After the Japanese attacked Pearl Harbor!” they shouted, often in self-congratulatory tones. And yet, a more careful assessment of World War II’s origins suggests that they were off by about five years. If we understand World War II as a global struggle against fascism, then the conflict begins in Spain in 1936 with General Francisco Franco’s army mutiny against the democratically elected Republican government. It is called a “Civil War,” but this is really a misnomer. Without support from Mussolini’s Italy, Hitler’s Germany, and Portugal under the dictatorship of Antonio de Oliveira Salazar, Franco and his rebel troops could not have succeeded. Military and material aid shifted the balance of power, and the Western democracies’ decision to stay neutral and impose an embargo on the Republic contributed to the unequal balance of power. Only the Soviet Union and Mexico officially came to the aid of the Republic.

My students generally know nothing about the Spanish Civil War, but they follow my line of reasoning and some are persuaded. But when I tell them that nearly 3,000 Americans traveled to Spain to defend the Republican government from fascist forces, and that they were joined by another 35,000 volunteers from around the globe, that is when I lose them. Most stare at me in utter disbelief. They cannot fathom why anyone in their right mind would travel half way across the world to fight, and possibly die, for a country that is not theirs. And for no money! My more activist-oriented students are delighted to discover such a significant episode of international solidarity. Before learning of the Lincoln Brigade, they were convinced that theirs was the first generation to attempt to organize on such a global scale. Every year I teach the story of the Spanish Civil War and the heroic participation of the International Brigades because it represents perhaps the greatest example of internationalism in the 20th century. They volunteered not only to defend one country but to defend humanity; they honestly believed that old labor slogan, “an injury to one is an injury to all.”

Their story ought to be common knowledge, but just try to find a high school student who has heard of the Spanish Civil War. We should not be too surprised by this sad state of affairs. The role Americans played in the fight for Spanish democracy was more than “forgotten”; it was consciously erased from our collective memory. Cold Warriors tried their best to turn a noble example of democratic liberalism into a vile act of subversion, and when that failed, history textbooks and social studies teachers simply ignored the Lincoln Brigade. Why? Because those who volunteered were labelled subversives — they were “premature antifascists.” Many were, in fact, Communists and independent radicals, but their greatest crime was to fight fascism on Spanish soil before our nation’s leaders were prepared to go to battle.

Thanks to this new edition of The Lincoln Brigade, we have a chance to reach more people with this remarkable story. This narrative will take you directly to the horrifying front lines of Jarama, across the jagged Pyrennese mountains, and back and forth into the contested streets and farms of America, where the Lincolns’ commitment to social justice was born. It is the extraordinary story of ordinary working people — people who, for the most part, had never traveled outside the country — risking their lives for the cause of liberty. They demonstrate that internationalism is not the preserve of those we call “intellectuals,” that assembly line workers, nurses and sharecroppers are capable of seeing their own struggles tied to working people throughout the world. What an astonishing example for current and future generations!

Best of all, these men and women never quit. As this updated edition of The Lincoln Brigade shows, they returned home to continue the good fight — battling Nazism in World War II, opposing U.S. racism at home and U.S. interventions in the Americas, reaching out to Franco’s political prisoners, and still marching in 2000, this time to demand the removal of a U.S. Navy that uses Vieques, Puerto Rico as a military firing range.

So study these fine photos in all their detail, the glowing, determined faces of arrivals, Oliver Laws hip beret, the bearded and shirtless kids who barely achieved manhood, the warm smiles of Evelyn Hutchins and Salaria Kee [also spelled Kea], the wounded, fatigued, resolute faces of returnees, the vigorous demonstrators that reach to the year 2000. Salaria Kea was a nurse in the Lincoln Brigades.

William Loren Katz and the late Marc Crawford have put together a richly detailed narrative and beautiful portrait of struggle and triumph, victory and defeat, and more struggle. Please read this book and circulate it. Read it aloud and spread this history like folklore and oral tradition. Make it part of our collective memory, our common story, our common knowledge. If we do, perhaps future generations will embrace the idea that the struggle for democracy knows no boundaries. If we do, kids of all ages may very well hold up their fists, continue the good fight, and say to the IMF and World Bank, No Pasaran!

William Loren Katz and Marc Crawford twice traveled with the Brigade to Spain in the 1980s, interviewed surviving Lincolns on old battlefields, and obtained never-before-published documents and photographs for The Lincoln Brigade: A Picture History.

In the 2013 edition, William Loren Katz added a sequel and newly discovered photographs, and Professor Robin D. G. Kelley, in a preface, placed this book in its historical setting. [Publisher’s description.]

8 comments on “The Lincoln Brigade: A Picture History”