When their baby sister becomes dangerously ill, thirteen-year-old Naledi and her younger brother journey to Johannesburg, South Africa where their mother works as a maid for a white family.

Written from an African point of view, this novel describes the conditions many African children face in South Africa. The central character is a 13-year-old African girl, Naledi. She, her nine-year-old brother, and baby sister live with their aunt and grandmother in one of South Africa’s infamous black “homelands.” When Naledi’s sister falls ill, Naledi and her younger brother set out on foot for Johannesburg to fetch their mother who works for a white family.

All of the major and most of the minor characters are Black. They are admirable figures who strive, albeit in different ways, to resist and surmount the obstacles erected by apartheid. Whites are distant figures. It is their institutionalized power over Blacks rather than their personalities that is emphasized here. This novel is unique in that it is one of a very few written from a Black South African perspective. The story is well written and realistic. [Description by Brenda Randolph at Africa Access.] 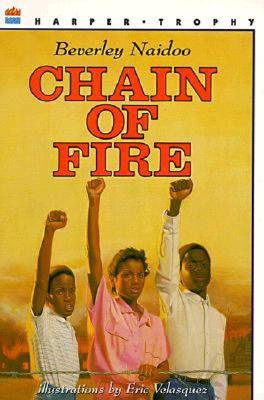 Book — Fiction. By Beverley Naidoo, illustrated by Eric Velasquez. 1993. 256 pages.
When the South African government forces a village to relocate, young protesters, who do not have the freedom of speech, organize a march against apartheid.