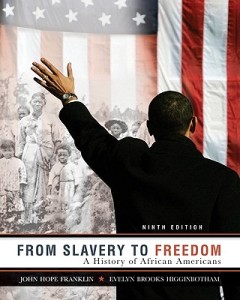 From Slavery to Freedom charts the journey of African Americans from their origins in Africa, through slavery in the Western Hemisphere, struggles for freedom in the West Indies, Latin America, and the United States, various migrations, and the continuing quest for racial equality.

Building on John Hope Franklin’s classic work, the ninth edition has been rewritten by the award-winning scholar Evelyn Brooks Higginbotham. It includes new chapters and updated information based on the most current scholarship. The text features greater coverage of ancestral Africa, African American women, differing expressions of protest, local community activism, black internationalism, civil rights and black power, as well as the election of the first African American president of the U.S. in 2008. [Publisher’s description.]