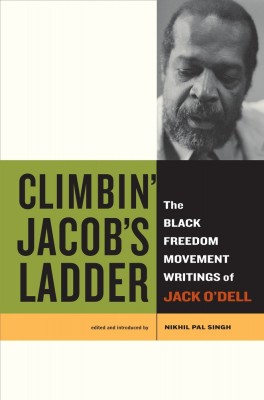 From his early years in the 1940s National Maritime Union, to his pioneering work in the early 1960s with Martin Luther King Jr., to his international efforts for the Rainbow Coalition during the 1980s, O’Dell was instrumental in the development of the intellectual vision and the institutions that underpinned several decades of anti-racist struggle. He was a member of the outlawed Communist Party in the 1950s and endured red-baiting throughout his long social justice career.

This volume is edited by Nikhil Pal Singh and includes a lengthy introduction based on interviews he conducted with O’Dell on his early life and later experiences.

This book helps to set the record straight, not just through the facts of O’Dell’s life, but through introducing the reader to O’Dell’s powerful analysis. —Bill Fletcher Jr., coauthor of Solidarity Divided

Jack O’Dell describes an ‘easy journey. . . [and] an easy course’ through his extraordinary life. But there was and is nothing easy about the roles Jack played-and continues to play — as strategist, tactician, mentor, and leader in so many campaigns for justice. As often behind the scenes as in front of the microphone, Jack fought for internationalism in the African-American freedom movement and held the internationalist movement accountable for fighting racism. Jack O’Dell resides among the greats in the pantheon of our movements and of our country. His words continue to shape our history. —Phyllis Bennis, author of Challenging Empire: How People, Governments and the UN Defy U.S. Power

Jack O’Dell is one of the great unsung heroes of the Black Freedom Movement. Climbin’ Jacob’s Ladder offers a fascinating and inspiring chronicle of O’Dell’s long career through his own writings. With a brilliant and exhaustive introduction by Nikhil Singh, one of the sharpest radical thinkers of his generation, this collection is a vital addendum and corrective to our existing knowledge of the ‘long’ Civil Rights Movement and its legacy. —Barbara Ransby, author of Ella Baker and the Black Freedom Movement: A Radical Democratic Vision