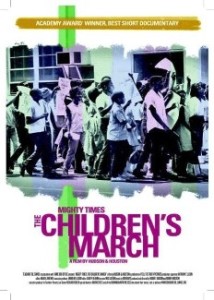 Mighty Times: The Children’s March tells the story of how the young people of Birmingham braved arrest, fire hoses, and police dogs in 1963 and brought segregation to its knees. In the spring of 1963, Birmingham, Alabama, was the “do-or-die” battleground for the Civil Rights Movement. Heavy intimidation by Birmingham authorities left the Movement floundering. Using word-of-mouth under a veil of secrecy, more than 4,000 African American schoolchildren organized to desert classrooms at exactly 11 a.m. on “D-Day,” May 2, 1963, touching off a week of mass demonstrations and rioting that shocked the nation. Police tried to stop them. Yet, the children prevailed.

“The Children’s March” kit includes a 40-minute teachers’ edition of the Academy Award-winning documentary film with closed-captioning; and a teacher’s guide. Teachers can order this kit for free.

Produced by Learning for Justice in association with HBO.

Background on the Birmingham Children’s March As is explained on the Stanford University’s Martin Luther King Jr. Papers Project, the King Research and Education Institute website:

Aware that support for protests in Birmingham was waning during April 1963, Dr. Martin Luther King Jr. and the SCLC looked for ways to jumpstart the campaign. When the arrest and jailing of King did little to attract more protestors, SCLC staff member James Bevel proposed recruiting local students, arguing that while many adults may be reluctant to participate in demonstrations for fear of losing their jobs, their children had less to lose. King initially had reservations, but after deliberation he agreed, hoping for the action to “subpoena the conscience of the nation to the judgment seat of morality.” SCLC and the Alabama Christian Movement for Human Rights (ACMHR) members immediately canvassed colleges and high schools for volunteers and began training them on the tactics of nonviolent direct action. As is described on the Civil Rights Movement Archive:

A passion for freedom sweeps through Parker High and the other Black schools of Birmingham and Bessemer, an emotional firestorm ignited by SCLC’s young field workers, led by class presidents and prom queens, cheerleaders and football players like big James Orange. A fire stoked and spread by “Tall Paul” White and other DJs at the Black radio stations. Thursday, May 2nd, is “D-Day” as students “ditch” class to march for justice. In disciplined groups of 50, children singing freedom songs march out of 16th Street Baptist church two-by-two. When each group is arrested, another takes its place. There are not enough cops to contain them, and police reinforcements are hurriedly summoned. By the end of the day almost 1,000 kids have been jailed.

The next day, Friday May 3rd, a thousand more students cut class to assemble at 16th Street church. With the jails already filled to capacity, and the number of marchers growing, Eugene “Bull” Connor (Commissioner of Public Safety in charge of the police and fire departments) tries to suppress the movement with violence. Instead of arresting the first group of marchers he orders his fire department to disperse them with firehoses. But the students hold their ground, singing “Freedom” to the tune of the ancient hymn “Amen.” Connor orders the water pressure increased to knock them off their feet and wash them away. Still singing, the young protesters sit down on the pavement and hunch their backs against the torrent. Continue reading.