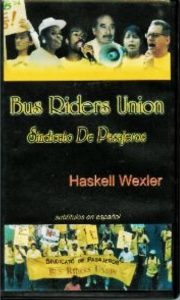 In this extraordinary video, Academy Award-winning cinematographer Haskell Wexler records the several-year-long struggle of the Los Angeles Bus Riders Union (BRU) to win better service and to challenge the race and class bias in city spending priorities. At 86 minutes, it’s long for classroom use and drags in a few places for many high school students; but what a rich documentary this is.

At the outset, Kikanza Ramsey, a young BRU organizer, explains that the union is “a political, social experiment to see if we can build a multiracial, bilingual, gender-balanced mass movement of working class people that is willing to fight for a set of demands that challenges corporate capital.” And this is not mere rhetoric. The remainder of the film brings her words to life, revealing the twists and turns, highs and lows of this struggle as seen through the eyes of participants.

We desperately need more classroom resources like this one. First, because in many respects the union is victorious; in the end they win lots more buses — and less polluting ones, at that — to ease overcrowding for their mostly immigrant, poor, people of color, working-class constituency. And students need to learn that struggle matters. But it’s how the BRU organizes — especially across lines of race, nationality, and language; with humor; with song; with determination; with an eye on the bigger systemic picture — that will leave a lasting impression. Hope is scarce in some “videos with a conscience;” in Bus Riders Union it plays a starring role. [Description by Bill Bigelow, Rethinking Schools.]

Produced by the Labor/Community Strategy Center.