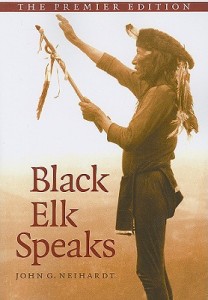 This inspirational and unfailingly powerful story reveals the life and visions of the Lakota healer Nicholas Black Elk and the history of the Sioux people.

Voices of a People’s History of the United States, edited by Howard Zinn and Anthony Arnove, includes an excerpt from Black Elk Speaks. Here is the introduction to that text and an excerpt. Voices includes dozens of powerful first person stories like this one from throughout U.S. history.

One of the worst massacres of Native Americans occurred on December 29, 1890, and was, as with so many other massacres, reported with indifference and even praised. The massacre followed soon after the killing of the Indian leader Sitting Bull. After his death, the Saturday Pioneer in Aberdeen, South Dakota, proclaimed, “The Whites, by law of conquest, by justice of civilization, are masters of the American continent. . . and the best safety of the frontier settlers will be secured by the total annihilation of the few remaining Indians.” The editor of the paper was L. Frank Baum, the author of The Wonderful Wizard of Oz. This account of the Wounded Knee Massacre is from the Oglala Sioux leader Black Elk, from his oral testimony published as Black Elk Speaks: “We Remember” poster by Bruce Carter.

“Our party wanted to go out and fight anyway, but Red Cloud made a speech to us something like this: “Brothers, this is a very hard winter. The women and children are starving and freezing. If this were summer, I would say to keep on fighting to the end. But we cannot do this. We must think of the women and children and that it is very bad for them. So we must make peace, and I will see that nobody is hurt by the soldiers.”

The people agreed to this, for it was true. So we broke camp next day and went down from the O-ona-gazhee to Pine Ridge, and many, many Lakotas were already there. Also, there were many, many soldiers. They stood in two lines with their guns held in front of them as we went through to where we camped.

And so it was all over.

I did not know then how much was ended. When I look back now from this high hill of my old age, I can still see the butchered women and children lying heaped and scattered all along the crooked gulch as plain as when I saw them with eyes still young. And I can see that something else died there in the bloody mud, and was buried in the blizzard. A people’s dream died there. It was a beautiful dream.”