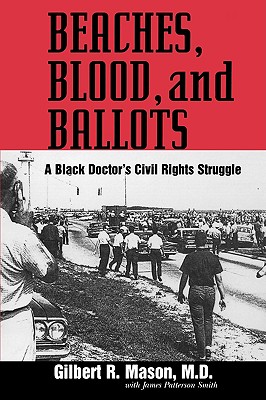 Beaches, Blood, and Ballots is Dr. Gilbert R. Mason’s eyewitness account of harrowing episodes that occurred on the Gulf Coast of Mississippi during the civil rights movement. Newly opened by court order, documents from the Mississippi Sovereignty Commission’s secret files enhance this riveting memoir written by a major civil rights figure in Mississippi. He joined his friends and allies Aaron Henry and the martyred Medgar Evers to combat injustices in one of the nation’s most notorious bastions of segregation.

In Mississippi, the civil rights struggle began in May 1959 with “wade-ins.” In open and conscious defiance of segregation laws, Mason led nine black Biloxians onto a restricted spot along the twenty-six-mile beach. A year later more wade-ins on beaches reserved for whites set off the bloodiest race riot in the state’s history and led the U.S. Justice Department to initiate the first-ever federal court challenge of Mississippi’s segregationist laws and practices. Simultaneously, Mason and local activists began their work on the state’s first school desegregation suit. As the coordinator of the strategy, he faced threats to his life.

Mason’s memoir gives readers a documented journey through the daily humiliations that segregation and racism imposed upon the black populace — upon fathers, mothers, children, laborers, and professionals. 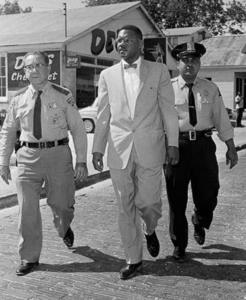 Born in 1928 in Jackson, Mason acknowledges the impact of his strong extended family and of the supportive system of institutions in the black neighborhood. They nurtured him to manhood and helped fulfill his dream of becoming a physician.

His story recalls the great migration of blacks to the North, of family members who remained in Mississippi, of family ties in Chicago and other northern cities. Following graduation from Tennessee State and Howard University Medical College, he set up his practice in the black section of Biloxi in 1955 and experienced the restrictions that even a black physician suffered in the segregated South. Four years later, he began his battle to dismantle the Jim Crow system. This is the story of his struggle and hard-won victory. [Publisher’s description]

Learn more about this Civil Rights Watershed in Biloxi.