After reading Thunder in the Mountains: The West Virginia Mine War, 1920-21 by Lon Savage (see description below), Rovics wrote this song about the biggest battle in the West Virginia Coal Mine War of 1920-1921. There is now a major struggle to save Blair Mountain from mountain top removal. See I Love Mountains.org  Also, find resources for teaching about the about struggles over coal and coal mining.

Listen to the song.

We shouted through the hillsides
In every union hall
We’re marchin’ on to Mingo
Teach them a lesson, once and all
We commandeered every freight train
To the Kentucky line
Took every car that crossed our path
And all the guns and ammo we could find

The union leaders tried to stop us
Mother Jones told us to turn back
But we had learned ourselves from the gun thugs
There’s a time to talk and a time to attack
We had no leader, we didn’t need one
We all knew the way through Logan County
And we all knew once we got there
We’re gonna hang Sheriff Chapin from a sour apple tree David Rovics website is full of “songs of social significance.”

The audio online and MP3 download for “Battle of Blair Mountain” can be found here. (Don’t forget to make a donation to the artist if you download the song.) For more songs like this, check out David Rovics’ Songs for Mahmud. 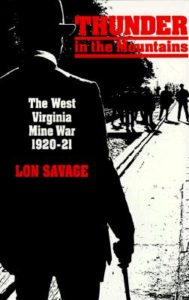 Thunder in the Mountains by Lon Savage. 1990. 216 pages. Foreword by filmmaker John Sayles (director of Matewan) and an introduction by historian John Alexander Williams.

The West Virginia mine war of 1920-21, a major civil insurrection of unusual brutality on both sides, even by the standards of the coal fields, involved thousands of union and nonunion miners, state and private police, militia, and federal troops. Before it was over, three West Virginia counties were in open rebellion, much of the state was under military rule, and bombers of the U.S. Army Air Corps had been dispatched against striking miners.

The origins of this civil war were in the Draconian rule of the coal companies over the fiercely proud miners of Appalachia. It began in the small railroad town of Matewan when Mayor C. C. Testerman and Police Chief Sid Hatfield sided with striking miners against agents of the Baldwin-Felts Detective Agency, who attempted to evict the miners from company-owned housing. During a street battle, Mayor Testerman, seven Baldwin-Felts agents, and two miners were shot to death.

Hatfield became a folk hero to Appalachia. But he, like Testerman, was to be a martyr. The next summer, Baldwin-Felts agents assassinated him and his best friend, Ed Chambers, as their wives watched, on the steps of the courthouse in Welch, accelerating the miners’ rebellion into open warfare.

Much neglected in historical accounts, Thunder in the Mountains is the only available book-length account of the crisis in American industrial relations and governance that occured during the West Virginia mine war of 1920-21. [Publisher’s description.]