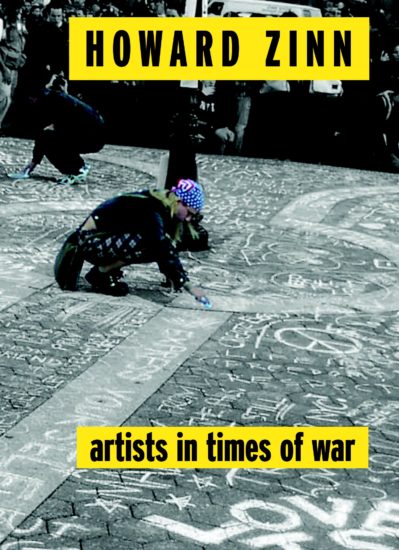 In Artists in Times of War, Howard Zinn looks at the possibilities to create such apertures through art, film, activism, publishing and through our everyday lives. In this new collection of four essays — three of which are previously unpublished — the author of A People’s History of the United States writes about why “To criticize the government is the highest act of patriotism.” “It wasn’t until I was in a war that I realized that there are no such things as good wars and bad wars,” writes Zinn in the book’s opening essay. It is this realization that Zinn tracks through each of the book’s four chapters, with each focusing on a different cultural manifestation of war resistance.

Chapter One examines the unique role of the artist to “transcend his or her moment” to critique power and inspire others to challenge authority. Chapter Two follows the example of Emma Goldman and anarchism. Chapter Three looks at how Hollywood has used film as a forum for resistance.

The book concludes with a historic essay on the role that grassroots pamphlet publishing has played in U.S. movement building and resistance. Filled with quotes and examples from the likes of Bob Dylan, Mark Twain, e. e. cummings, Thomas Paine, Joseph Heller, and Emma Goldman, Zinn’s essays discuss America’s rich cultural counter-narratives to war, so needed in these days of unchallenged U.S. militarism. [Publisher’s description.]