During the White House Conference on American History on September 17, 2020, President Trump and other speakers attacked the Zinn Education Project, Howard Zinn’s A People’s History of the United States, and the New York Times 1619 Project. There was a powerful response on twitter by thousands of people including teachers, historians, and journalists. Here is a selection of the tweets in defense of teaching and learning people’s history.

I would just like to note that the 1920s Klan worked to have public schools promote patriotic, Protestant & white supremacist education because they understood that schools are where future citizens are trained. https://t.co/GVPmbwrs9Y

I can think of no better endorsement for a book than “the president hates it and thinks it will make you rebellious.”https://t.co/kxLsIjAfUa

The #1619Project, the late #HowardZinn and the @ZinnEdProject are vital tools in countering the widespread racist myths about the founding of this country that a growing number of people are becoming aware of. https://t.co/YsEkn0vinI

LOL @ “unsuspecting teachers”…there is very little snuck into the curricula of history teachers, I promise https://t.co/7MgNaC7V5b

Thank you for always sneaking all those free resources under my door.

If by “sneaking under my door” he means I actively engage with your website and resources regularly in order to become a better teacher then yes, sure, that’s what happened.

Shoutout Howard Zinn, Shoutout @ZinnEdProject! Y’all are an inspiration for both your truth-telling and your curricular materials that enhance student critical thinking. https://t.co/whwNts8GYq

Howard Zinn was a great historian who opened millions of minds on things like the struggle for social justice, racial equality, & labor rights.

@ZinnEdProject is his legacy. Check it out.

Do you know what’s propaganda?

Listening to more than 5 seconds of Donald Trump. https://t.co/QhlYFZzuLS

Trump just sponsored a “White House Conference on American History” that attacked on #HowardZinn and the @ZinnEdProject.

They are launching an all out assault on a people’s history in favor of blind patriotic indoctrination.

“A People’s History of the United States” was my assigned US history textbook at Mountain View High School.

Professor Howard Zinn’s scholarship has informed my life and my life’s work ever since.

I first read parts of Zinn’s A People’s History of the United States in 6th grade history. It opened my eyes to a different worldview from the history I had been taught, and introduced me to the idea of scholarly history as an argument. It’s the most important book I’ve ever read https://t.co/SQEo5RexH5

I had just been wondering about a good resource for finding history books for my kiddo while he’s doing school from home. So I guess I should thank the WH for putting @ZinnEdProject on my radar without any work. 🤷‍♀️ https://t.co/WQidIDpH85

My high school civics teacher, the late Betty Swicord, bought a stack of Howard Zinn’s “People’s History of the United States” with her own money and encouraged us to read it on our own. I owe her more than I can express. https://t.co/eKMYEthmPr

Trump trashed Howard Zinn today…as good a time as any to learn more about his important legacy. Here is the forward I wrote to his autobiography a few years ago. https://t.co/smqGsv0BCP

It may not seem like a big deal to liberal elites. But here in this Ohio diner in the middle of a pandemic with massive unemployment, all anyone wants to talk about is Howard Zinn’s A People’s History of the United States.

Howard Zinn being furiously slammed by a vile white supremacist at the fever pitch of a presidential campaign that will decide the fate of billions of people (ten years after his death, no less) is one hell of a compliment to his life’s work.

Because of your speech today, more people will read Howard Zinn and @nhannahjones‘ 1619 Project. More people will realize that the founding fathers in 1776 were all white men who didn’t let women vote or consider black people full human beings.

Thank you Trump for reminding the American people of what a national treasure Howard Zinn remains — and what an abject failure you are, and will always be.

I see Howard Zinn trending and I know before I check that Trump is criticizing this historian who died ten years ago. I heard Zinn speak at Boston University many years ago with Daniel Berrigan. His ‘People’s History” addresses genocide and slavery, which are facts, not theories.

How cool would it be if Trump’s free publicity of The 1619 Project, Critical Race Theory and Howard Zinn made millions more US youth read more on the truth of America? https://t.co/WuVdWLwdse

Howard died in 2010. His writings have taught millions of people the idea that history is made by ordinary people who perform extraordinary acts of dissent. That he and his philosophy haunt Trump fills me with joy. https://t.co/N0nQT4xkhi

A good day to pull out #HowardZinn’s “SNCC: The New Abolitionists.” In it Zinn argues that people like John Lewis, Diane Nash, Jim Lawson, the Greensboro Four and their SNCC sisters & brothers were carrying on the work of abolitionists because slavery hadn’t really ended #History pic.twitter.com/7TCLnP0dYr

“Dissent is the highest form of patriotism.” – Howard Zinn pic.twitter.com/s2WqjEhFIC

We need 2 stand up & support organizations like @ZinnEdProject for the deep, persistent work they do toward real equality– teaching how damaging systems of racism shaped and shape many of our national institutions and practices and how it hurts all of us. #changenow https://t.co/1z7xt0Y3wT

This is a great time to learn more about @ZinnEdProject and support them. They offer an astonishing array of free resources and lesson plans for learning and teaching about the history most don’t get in school or textbooks. https://t.co/061uB5r0bt

Howard Zinn’s book, “A People’s History of The United States,” was the only piece of curriculum in my K-12 schooling that I felt a connection with. It informed my view of the world, my education philosophy, & my commitment to education for social justice. #HowardZinn https://t.co/yRIQHm4dFt

I’ve used @ZinnEdProject in my classroom 4 over a decade with great success & have no intention of stopping.

I encourage all educators 2 visit their website & utilize their incredible (and free!) teaching resources. https://t.co/deuHnw1vNF

So much of the legitimacy of America’s social, economic, and political infrastructure is predicated on ahistorical myth. Studying slavery shows us that. They know that once ppl understand slavery’s entanglement in every facet of US history, the legitimacy of its systems unravels.

Hated “history” as it was taught in HS when I took it. Read Zinn’s “People’s History” after my first (forced) History class/prof in college required it and haven’t looked back. Now 24 years into teaching history as it should be taught: Truthfully and factually @ZinnEdProject

I’m going to BECOME a small monthly donor BECAUSE of this. I love Zinn Ed, their mission, their commitment to social justice and antiracist teaching, and all of their work, their programs, and their materials. I hope that ‘Voldemort’s’ words set off a flood of donations.

Count me in the number of the over 100,000 teachers ⬇️ using @ZinnEdProject FREE lessons!

I’ve used The People vs. Columbus, et al. Trial in my classrooms from 6th Grade to College for YEARS! Student engagement is always off the charts 📈

It’s the People’s History for me! https://t.co/vHgk5b9ysk

On Thursday, Trump railed against "left-wing indoctrination" in U.S. schools, calling the work of historians like Howard Zinn "propaganda tracts."

This is my favorite photo that doesn't involve my family. It's Howard Zinn and me before we did an event together in Chicago in 2009. Howard was one of a kind and his writings have empowered generations to make their own history. Support the @ZinnEdProject today. God bless. pic.twitter.com/AJaHlCULzj

Just a small sampling of the patriotic educational materials for teaching and learning history from the @ZinnEdProject including the #1619Project from @nhannahjones. They have done #HowardZinn proud and could do more with more support. I just donated! https://t.co/jISUOPiHof pic.twitter.com/B1oouJFdHp

Are you creeped out yet? In light of this latest fascist move, I say we all give to @ZinnEdProject, the target of #Trump's freak out over the teaching of history from multiple perspectives, not as a single white man's story. Donate to @ZinnEdProject here: https://t.co/VY5dUAZiZN

Waking up and planning today more focused, invigorated, and energized to bring the REAL history of the US to my students! @ZinnEdProject pic.twitter.com/63kjK9AEDZ

I have just donated to @ZinnEdProject with the dedication, "In defiance of tyrants who fear real history."

Please consider giving as well. Their work is even more important today than it was yesterday.

"I can’t think of anything more important we can do in education than to get students to challenge these fundamental premises which keep us inside a certain box." @ZinnEdProject pic.twitter.com/QztxZDEe2t

Teaching the truth about Reconstruction (https://t.co/bo2niSSRK4) is one of the @ZinnEdProject campaigns the White House is most afraid of. Read about the impact of the campaign in this @hechingerreport article by @ThomasLesterA. https://t.co/ry7iBvX6u9 #TeachReconstruction pic.twitter.com/bZPC3UStaR

Following @NoeGK's example, I decided to make a donation to @ZinnEdProject too. My graduate stipend is limited, but I strongly believe in the project of people's history and I'm aghast at the increasing repression on academic freedom in the US. https://t.co/H0QJwQCyjS

Trump says “our children are instructed from propaganda tracts like those of Howard Zinn, that try to make students ashamed of their own history.” His lie proves the necessary honesty of “A People’s History of the United States” and its #transitionaljustice value. @ZinnEdProject https://t.co/DV5hGIK9iz pic.twitter.com/La7Eb6VthH 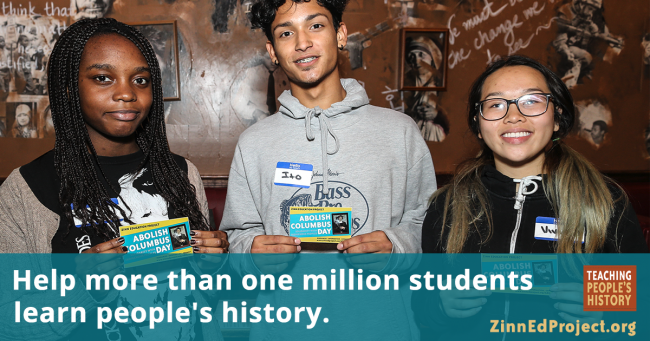 Your support is needed to help more students learn people’s history. Please donate so we can continue to support teachers and students.