At the end of February, 120 9th-grade students and their teachers at E. L. Haynes Public Charter High School in Washington, D.C. watched the documentary film Precious Knowledge and reacted to it in small advisory groups.

Throughout the screening, students were able to tweet their reactions, questions, and connections.

The principal, Caroline Hill, kicked it off with the tweet, “How precious is knowledge?” The students sent dozens of tweets during the film, capturing their insights, indignation, and inspiration: 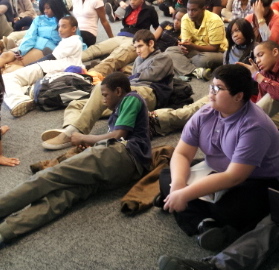 In one advisory group after the screening, students listed their emotions and their questions. Their list of feelings included: informed, disrespected, angry at the people who made the law, confusion, and strength.

Students will have the opportunity to continue to reflect, debrief, and take action in the coming weeks.