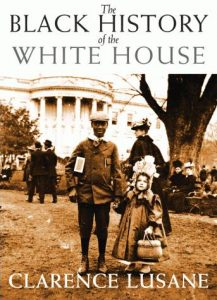 The untold story of African Americans in the White House from the 18th century to the present, including the presidents who held people in bondage.

Clarence Lusane’s The Black History of the White House shares the untold stories of some of the people who were enslaved by U.S. presidents, including stories of resistance and escape.

Lusane describes the myriad ways that the White House and the lives of African Americans have been intertwined throughout U.S. history, from the building of the White House to the present day.

Learn more from Lusane’s article “Missing from Presidents’ Day: The People They Enslaved.”

Untold History: More Than a Quarter of U.S. Presidents Were Involved in Slavery, Human Trafficking

“When you sing that this country was founded on freedom, don’t forget the duet of shackles dragging against the ground my entire life.” This is how poet Clint Smith III begins his letter to past presidents who owned people. In honor of Black History Month, Smith offered his Brief But Spectacular take on the history of racial inequality in the United States. From PBS NewsHour, 2017