On August 5, 2012, a white supremacist entered the Sikh Temple of Wisconsin, in Oak Creek, and shot 10 worshipers, killing six and wounding four. 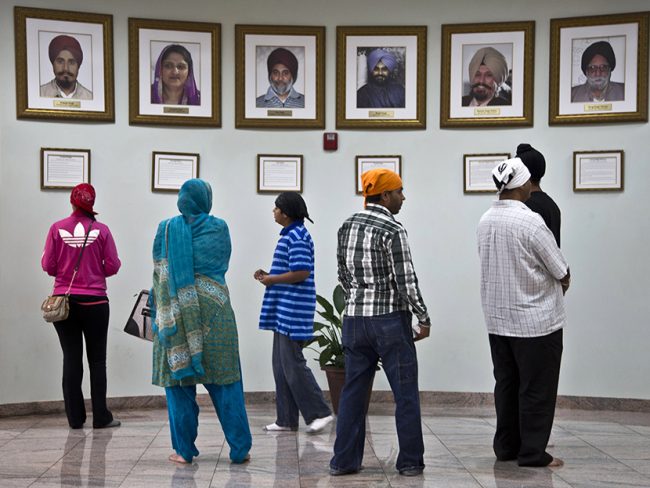 Visitors look at a memorial near the entrance of the Sikh Temple of Wisconsin Wednesday, July 31, 2013, in Oak Creek, Wis. Source: AP Photo/Morry Gash.

The perpetrator, who took his own life, did not leave a recorded explanation for his violent attack, but he had a history of affiliation with white supremacist and Neo-Nazi groups. An acquaintance reported that the shooter believed that a “racial holy war” was coming.

Many members of the Sikh community say the massacre has shaken their sense of security. Sikhism is the fifth largest religion in the world with over 25 million followers, of which roughly 500,000 live in the United States. Following the September 11, 2001, attacks, Sikh Americans face many of the same discriminatory conditions as Muslims and Arabs Americans. Because of their distinct appearance, they were visible targets of violence and harassment. Observant Sikhs do not cut their hair. Male followers often wear turbans and don’t shave their beards.

We recommend the Rethinking Schools article “Responding to Tragedy: 2nd graders reach out to the Sikh community” by Milwaukee elementary school teacher Dale Weiss. She begins:

When significant news events occur, usually my first reaction is “How will I teach this to my students?” This was the question I asked myself on Aug. 5, 2012, when an assailant shot and killed six members of the Sikh community at their temple in Oak Creek, Wisconsin. I felt such sadness and horror on hearing of this atrocity. At the same time, I realized how very little I knew about Sikhs. Continue reading.

More guides for teaching about the subject of racist violence and its roots can be found at Learning for Justice, and you can access a series of reports on the tragedy at Democracy Now!

Read more about the people who died that day in an online memorial at the Sikh Temple of Wisconsin website. Remember Oak Creek, a project by the Sikh Coalition and the Revolutionary Love Project, also provides vital resources and suggestions for learning more about this tragedy.

This is sadly one of many massacres in U.S. history.