On March 22, 1968, Dr. Martin Luther King, Jr. and the Community on the Move for Equality called for a march in Memphis, Tennessee in solidarity with sanitation workers who were on strike.

The flier calls for the use of “soul-force which is peaceful, loving, courageous, yet militant.”

The strike had begun in February when African American sanitation workers Echol Cole and Robert Walker were crushed by a truck compactor in Memphis.

Their deaths, along with the racist treatment of the sanitation workers, led more than 1,100 workers to strike for better wages, conditions, and safety on Feb. 12, 1968.

Find resources below to teach about the strike and the Civil Rights Movement after 1965. 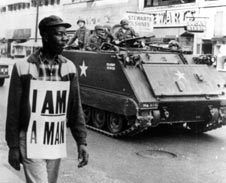