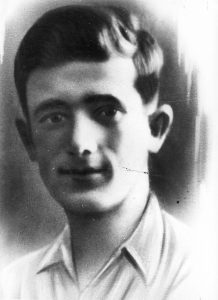 Mordechai Anielewicz, one of the leaders of the uprising. Image Source: Jewish Currents.

On Jan. 18, 1943, Jews in the Warsaw ghetto organized armed self-defense units to oppose deportations to forced-labor camps and to the Treblinka extermination camp.

This was the first and largest Jewish urban uprising in German-occupied Europe which sparked other ghetto uprisings, including the April-May Warsaw Ghetto Uprising. As David Rovics explains in his song, I Remember Warsaw:

. . . people said we had no chances
By then we all knew they were right
It was 1943
And we, the walking dead, made up our minds to fight

We cleansed the ghetto of their agents
Dug a maze of tunnels underground
We begged the Allies, give us weapons
But empty words were all we found. . . Continue reading and listen.

Read more about this resistance and subsequent uprisings in the Warsaw Ghetto at the U.S. Holocaust Memorial Museum.