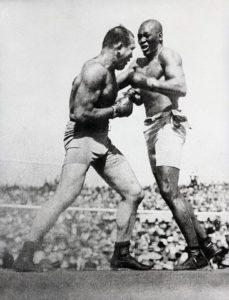 On July 4, 1910, African American heavyweight champion Jack Johnson successfully defended his title by knocking out James J. Jeffries, who had come out of retirement “to win back the title for the White race” in Reno, Nevada.

Terrorist attacks were made on Africans Americans (referred to in media and textbooks as “race riots”) throughout the country that evening and on July 5.

See photos and primary documents from the Nevada Historical Society.

Learn more in  A People’s History of Sports in the United States by Dave Zirin.