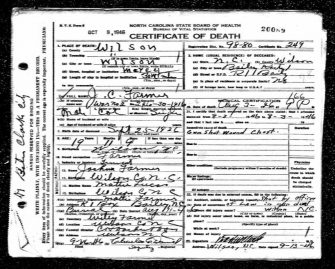 J. C. Farmer, a 19-year-old African American WWII veteran, was waiting to board a bus in Wilson County, North Carolina when an officer requested he get into the squad car.

Farmer refused, the officer hit him in the back of the head and pulled out his gun on Farmer. The two got into a scuffle and the gun went off, shooting the officer in the hand.

Farmer managed to escape but within a few hours was met with a mob of 20 white men in front of his home. His mother watched as he was shot with sub machine guns.

The story of Farmer is included in Black Wide – Awake and Lynching in America: Targeting Black Veterans.

Read, We Charge Genocide: The Crime of Government Against the Negro People by the Civil Rights Congress to read about J. C. Farmer and many other cases of state sanctioned violence from 1945 – 1951. 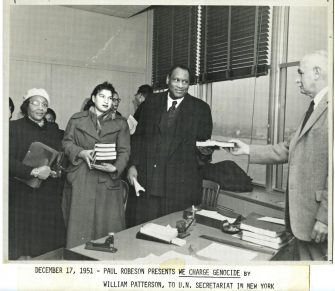 The petition, signed by almost 100 intellectuals and activists, was submitted on December 17, 1951 by Paul Robeson and William Patterson from the Civil Rights Congress (CRC) to the United Nations.

This book-length petition documents hundreds of lynching cases and a clear pattern of government inaction or actual complicity. It charges that in the 85 years since the end of slavery more than 10,000 African Americans are known to have been lynched (an average of more than 100 per year), and that the full number can never be known because the murders are often unreported.