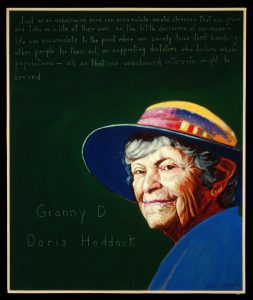 Doris Haddock had studied the issue of campaign finance reform so that she could communicate her views to the people who assembled to meet her along the way, including the more than 2,000 who greeted her arrival in Washington, D.C. on February 29, 2000.

She spent a year training for the physical challenges she would encounter on the trip, which would wear out four pairs of shoes and included a hundred-mile stretch that she covered on cross-country skis.

She is widely credited for galvanizing the public support that helped pass the McCain-Feingold Campaign Finance Reform Act in 2002.

See an excerpt of a 2004 interview with Granny D in the midst of her campaign for the U.S. Senate against New Hampshire incumbent Judd Gregg, on Democracy Now.

Commitment to campaign finance reform is but one facet of an activist career that included working on environmental issues in Alaska (1960) and writing and speaking against war in Iraq (2003). She tells her fellow citizens:

We must not be content to go home and watch television when there is a democracy to run, or to spend all our money on ourselves and our children. Right now, many young people will tell you to ‘get a life’ if you suggest that they get involved in community issues. But that is a life. That is the life of free people in a democracy.

Description above adapted from longer profile at Americans Who Tell the Truth.