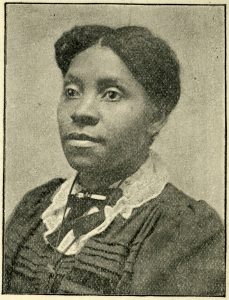 The first annual convention of the National Ex-Slave Mutual Relief, Bounty, and Pension Association was held in Nashville, Tennessee from Nov. 28 to Dec. 1, 1898.

The Convention elected Callie House, a formerly enslaved woman from Tennessee, to be assistant secretary of the Association. House became its leader for the next 20 years.

House explained the political goals of the organization:

If the Government had the right to free us, she had a right to make some provision for us and since she did not make it soon after Emancipation she ought to make it now. 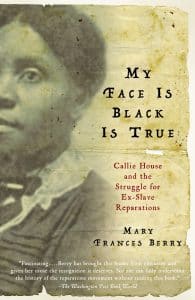 In the podcast, Callie House, Reparations Advocate and Trailblazer, professors Mary Frances Berry (author of My Face Is Black Is True) and Tiffany Patterson describe how,

Soon after its founding, the Association, and Callie House, were plagued by legal harassment stemming from the government’s false claims of fraud. Behind the scenes, government officials worried that the pension movement “is setting the negroes wild, . . . making anarchists of them.” 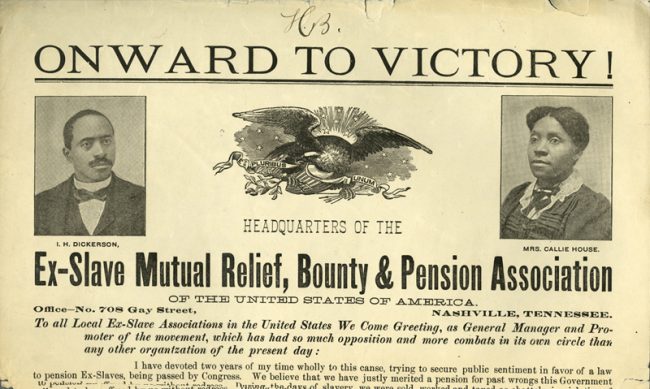 After 20 years of organizing formerly enslaved people all across the south, sending countless petitions to congress, and even suing the government for reparations, House was jailed on trumped up charges of mail fraud. Read about those charges in the tweet thread below.

In 1916, Black reparations activist, Callie House was charged w/ obtaining money or property by false or fraudulent pretenses, by “placing or causing to be placed, any letter. . .in any post office.” The penalty was $1,000, imprisonment for up to 5 years, or both. https://t.co/JNMnYDDNtg

No Pensions for Ex-Slaves: How Federal Agencies Suppressed Movement To Aid Freedpeople by Miranda Booker Perry at the National Archives

My Face is Black is True: Callie House and the Struggle for Ex-Slave Reparations by Mary Frances Berry

Find lessons below to teach about reparations.