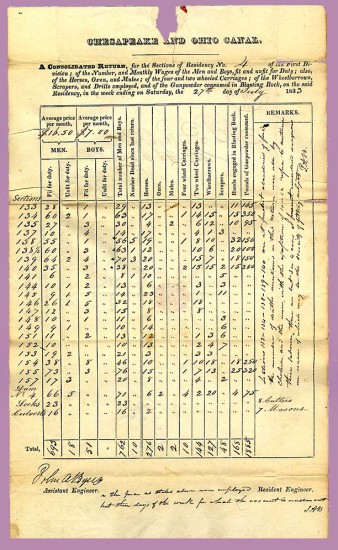 The fifth column from the left indicates the number dead since the prior report. Source: Assistant Engineer, John A Byers, July 27, 1833, enumerating workers and equipment from USGenWebArchives. Click for more info.

Recruitment signs posted in Ireland by the Chesapeake and Ohio Canal companies promised: “Meat! Three times a day! Plenty of bread! and fresh vegetables with generous portions of liquor and good wages!”

The advertisements turned out to be false and the immigrants barely survived the brutal and dangerous work. One letter home in 1860 said: “The rarest sight in America, is that of a grey haired Irishman.”

When labor uprisings increased toward and into the turn of the century, business leaders were confident in the knowledge that they could turn to local, state, or federal government leaders to defend them against organized labor. (Adapted from History.com)

Learn more about this event from Andrew Jackson and the C & O Canal by Joshua Rothman at We’re History. Rothman writes:

The riots of January 1834 would not be the last along the construction route of the C&O Canal. The company and contractors still sometimes withheld wages and pitted crews of laborers against each other for work, leading to sporadic unrest, violence, ethnic conflicts, and strikes in the years to come. Friction was exacerbated significantly by an economic depression that began in 1837, and sometimes the forces of the state intervened. In 1839, for example, state militia units arrested several dozen men near Little Orleans, Maryland, about forty miles from Williamsport, in response to an especially vicious assault by Irishmen on a camp of German canal workers. This time, most of the arrested were tried and sentenced to prison, in some cases for terms of nearly twenty years. Continue reading.

Below is a photo of another time that armed forces were called in to protect the interests of company owners against the workers, this time in Lawrence, Massachusetts in 1912. 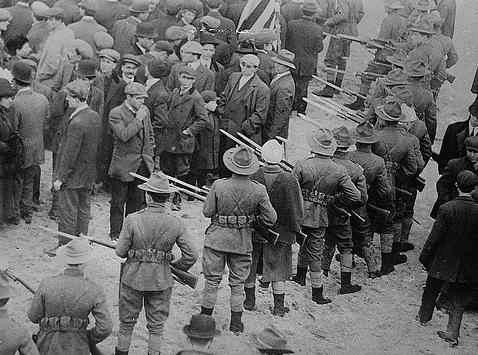 Teaching Activity. By Bill Bigelow and Norm Diamond. 10 pages. This role play activity on the famous 1892 Homestead Strike, explores the possibility of solidarity among workers of very different backgrounds and at different levels in the workplace hierarchy.

Spies from the Pinkerton Detective Agency and striking steelworkers engaged in a major battle as part of the Homestead Strike.