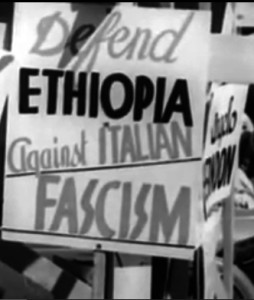 March in support of Ethiopia. Frame still from the film The Good Fight.

Ethiopia, one of only two independent African nations at the time, was invaded on Oct. 3, 1935 by Fascist Italy under Benito Mussolini.

Black outrage throughout the world was unified. The League of Nations, forerunner to the United Nations, was criticized sharply.

From Kingston to Johannesburg, from Detroit to Ghana, from Port-of-Spain to Paris, Black men and women offered to go fight in defense of Ethiopia. [From BlackFacts.]

In The Forgotten Fight Against Fascism, William Katz describes the organized response by African Americans in the United States,

In the midst of a worldwide “Great Depression,” citizens in the distant United States were aroused to help Ethiopia. Black men trained for military action — an estimated 8,000 in Chicago, 5,000 in Detroit, 2,000 in Kansas City. In New York City, where a thousand men drilled, nurse Salaria Kea of Harlem Hospital collected funds that sent a 75-bed hospital and two tons of medical supplies to Ethiopia.

W. E. B. Du Bois and Paul Robeson addressed a “Harlem League Against War and Fascism” rally and A. Philip Randolph linked Mussolini’s invasion to “the terrible repression of Black people in the United States.” 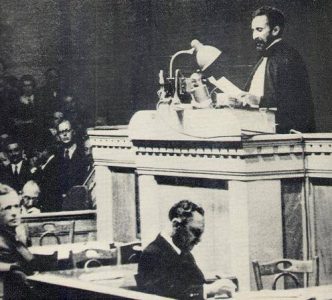 Haile Selassie addressed the League of Nations in June of 1936.

Read the “Appeal to the League of Nations” by Haile Selassie, June, 1936. Here is an excerpt:

I, Haile Selassie I, Emperor of Ethiopia, am here today to claim that justice which is due to my people, and the assistance promised to it eight months ago, when fifty nations asserted that aggression had been committed in violation of international treaties.

Also, there has never before been an example of any Government proceeding to the systematic extermination of a nation by barbarous means, in violation of the most solemn promises made by the nations of the earth that there should not be used against innocent human beings the terrible poison of harmful gases.

It is to defend a people struggling for its age-old independence that the head of the Ethiopian Empire has come to Geneva to fulfil this supreme duty, after having himself fought at the head of his armies.

We welcome photos or newspaper reports on the international solidarity described in this post. Please email to: zep@zinnedproject.org