On Jan. 18, 1968, singer and actress Eartha Kitt spoke the truth at a White House luncheon meeting on crime and juvenile delinquency.

Kitt was asked her opinion and she stated that it was not an issue of “delinquency,” instead young Americans were:

angry because their parents are angry . . . because there is a war going on that they don’t understand . . . You send the best of this country off to be shot and maimed. They rebel in the street.

The retaliation for her honest critique of the war was so swift and strong that within hours her career in the U.S. was ruined for 10 years. The C.I.A. watched and tried to undermine her. 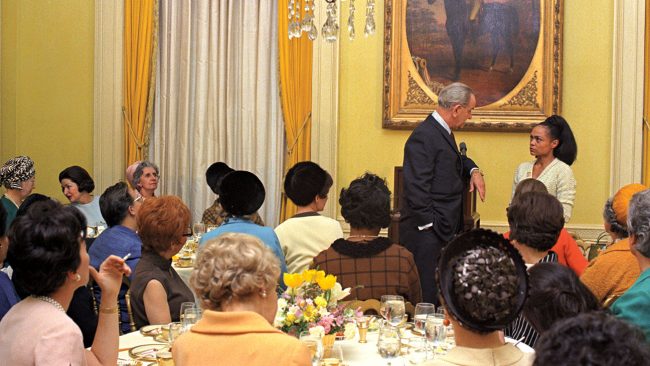 Kitt said she never regretted the stand she took that day, but learned that:

Read more about Earth Kitt’s political moment at the White House and about how the CIA tracked her afterward.

In 1968, on WGBH Boston, Howard Zinn offered a guest editorial where he nominated Eartha Kitt for Woman of the Year and Dr. Benjamin Spock for Man of the Year because “both refused to play the game” by speaking out against the Vietnam War.

Renee Poussaint interviewed Eartha Kitt about the “White House Incident” for the Visionary Project. Posted below, it is a well worth watching.

Find resources below for teaching outside the textbook about the Vietnam War and COINTELPRO.