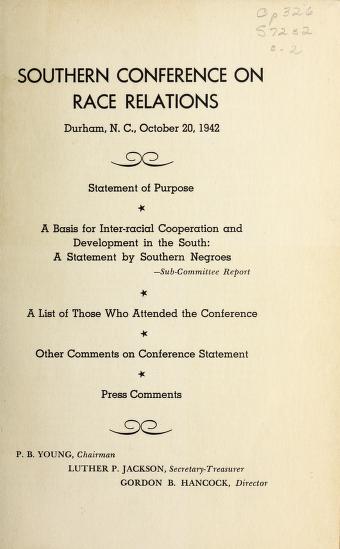 On Oct. 20, 1942, the Southern Conference on Race Relations (SCRR) was held in Durham, North Carolina with more than 50 prominent African American leaders of the South to discuss solutions for inter-racial cooperation.

An outcome of the conference was the “Durham Manifesto,” which called for democratic participation of African Americans through the right to vote, equal pay, employment rights, anti-lynching laws, eradication of poll taxes, and an end to segregation in order to ease current and anticipated racial violence in the South.

The Museum of Durham History notes,

The finished document judiciously stated Blacks’ opposition to Jim Crow, plus their civic  priorities, and challenged moderate and liberal whites to join them in pursuing equal citizenship and justice for all. It announced:

We are fundamentally opposed to the principle and practice of compulsory segregation in our American society, whether of races or classes or creeds, however, we regard it as both sensible and timely to address . . . current problems of racial discrimination and neglect.

Its key demands included the:

“The correction of these problems is not only a moral matter,” it concluded, “but a practical necessity in winning the war and in winning the peace.”

The Manifesto was one of the most significant Southern documents of the 1940s. It addressed the dichotomy between African American soldiers fighting overseas in the name of democracy while in the U.S. they were facing racial violence and being denied basic human rights. It also established a blueprint for the strategic struggle for African American civil rights in the 1950s and 1960s.