Our apologies, good friends, for the fracture of good order, the burning of paper instead of children . . . — Father Daniel Berrigan, from statement read at his court trial

On May 17, 1968, nine people entered the Selective Service Offices in Catonsville, Maryland, removed several hundred draft records, and burned them with homemade napalm in protest against the war in Vietnam. The nine were arrested and, in a highly publicized trial, sentenced to jail. 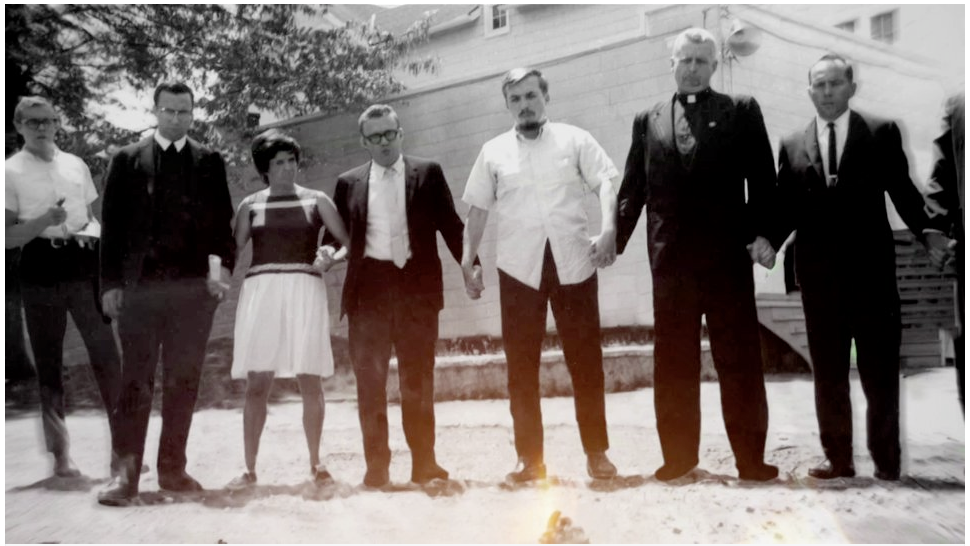 Members of the “Catonsville Nine”

Howard Zinn traveled to Baltimore for the trial of the Catonsville Nine. He provided quotations from the protestors in A People’s History of the United States, including the perspective of former nun Mary Moylan (not pictured above). Moylan was sentenced to prison but went underground, never captured until she presented herself to the state in 1978. While in hiding from the FBI, she wrote:

I suppose the political turning point in my life came while I was in Uganda. I was there when American planes were bombing the Congo, and we were very close to the Congo border. The planes came over and bombed two villages in Uganda. . . .

When I came home from Africa I moved to Washington, and had to deal with the scene there and the insanity and brutality of the cops and the type of life that was led by most of the citizens of that city — 70 percent Black. . . . And then Vietnam, and the napalm and the defoliants, and the bombings. . . . At the time of Catonsville, going to jail made sense to me, partially because of the Black scene — so many Blacks forever filling the jails. . . . I don’t think it’s a valid tactic anymore. (APHUS, page 408)

To learn more and find a rich collection of documents, a song, video, and photos, see the Catonsville Nine Files digital collection and the two documentaries referenced below.

Investigation of a Flame

The award winning film Investigation of a Flame, by Lynne Sachs, combines long unseen archival footage of the Catonsville action with a series of informal interviews of Daniel Berrigan, Philip Berrigan, John Hogan, Tom Lewis, Marjorie and Tom Melville, and Howard Zinn to encourage viewers to ponder the relevance of such events today.

Sachs’ elegant, elliptical documentary visits with surviving members of what became known as the Catonsville Nine, humble architects of this purposeful yet scathingly metaphoric act of civil disobedience. — Jessica Winter, The Village Voice

In honor of the Howard Zinn Centennial, filmmaker Lynne Sachs is making the film available for free for educators below.

Investigation of a Flame by Lynne Sachs for Zinn Education Project from Lynne Sachs on Vimeo.

Another film about the anti-war activism of the Catonsville Nine and their compatriots is Hit and Stay (2013), directed by Joe Tropea and Skizz Cyzyk. The film features interviews with and historic footage of individuals including Bill Ayers, Daniel Berrigan, Noam Chomsky, Ramsey Clark, Amy Goodman, Laura Whitehorn, and Howard Zinn. 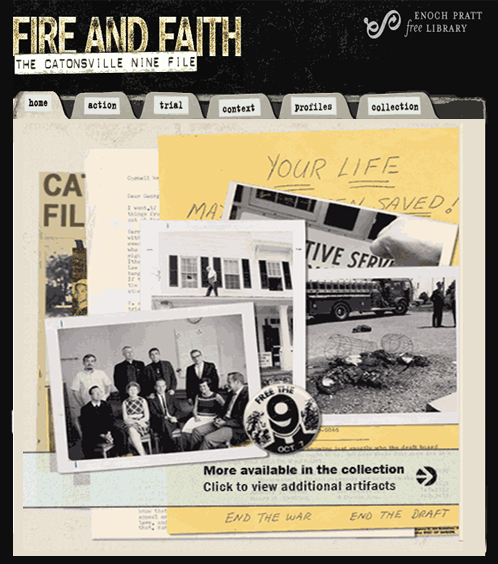