After students study Christopher Columbus, the first question is usually, “Why are we celebrating this murderer with a holiday?”

One recent victory from this advocacy is in Washington, D.C., where the city council voted to change Columbus Day to Indigenous Peoples’ Day in October of 2019.

While the media has focused on the role of the city council member who proposed the legislation, credit should also go to the students and teachers who advocated for this change for many years. 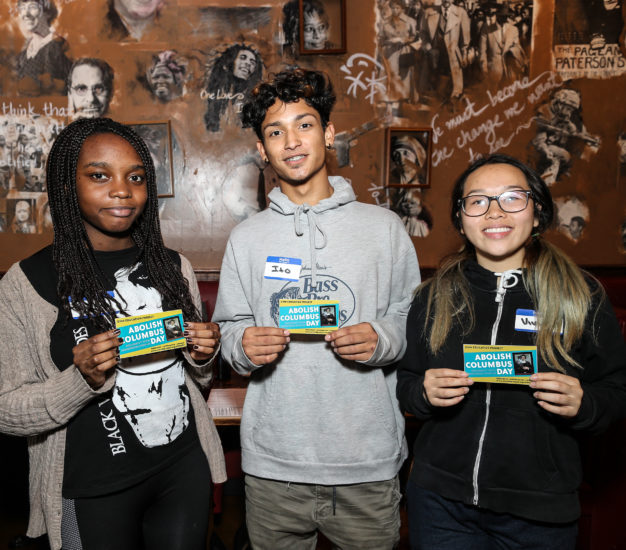 For example, students in Caneisha Mills’ 8th-grade U.S. History classes at Hardy Middle School (DCPS) wrote hundreds of letters to the Mayor over the past few years. Here is an excerpt from an 8th grader’s letter in 2018:

Dear Mayor Muriel Bowser: In Washington, D.C. we still “celebrate” Columbus Day, where a man came to America (not discovered) and killed Native Americans. . . . We should at least have one day that honors the thousands of people that lost their lives to a man who was ordered to “discover” new land but spread diseases and caused major genocide. . . Sincerely, Johnny C.

As Courtland Milloy reported in the Washington Post in 2017, high school students from Capital City Public Charter School (CCPCS) took action after their teacher Amrita Wassan introduced The People vs. Columbus, et al. lesson. “They put Columbus on trial in mock court for terrorism, slavery and murder. The evidence against him was overwhelming, and a jury found the 15th-century explorer unworthy of a national holiday.” He added,

They began a petition drive to rename the second Monday in October Indigenous Peoples’ Day. So far, they have collected about 500 signatures. They also asked the D.C. Council to hold hearings on the issue.

“It’s ridiculous to honor Columbus,” Kiara said. “There’s a statue of him at Union Station. It’s like saying, ‘Welcome to Washington. We like racists.'”

The CCPCS students presented in a teach-in for D.C. area educators and appeared on the Thom Hartmann show called “The Big Picture.” 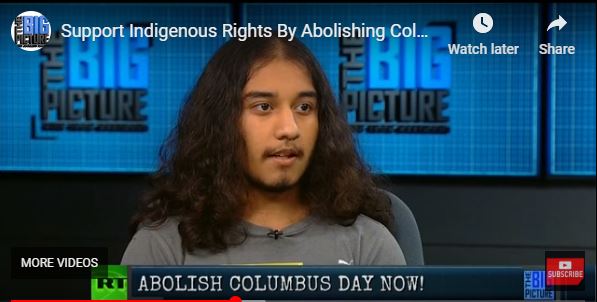 The advocacy of these students and more contributed to the groundswell of support for the new, and long overdue, D.C. legislation to change Columbus Day to Indigenous Peoples’ Day.

There are many more examples beyond D.C.

In Virginia, Arlington Public Schools elementary school teacher Wendy Bermudez adapted The People vs. Columbus lesson for a Spanish immersion class. By the end of the lesson, several students began questioning why Christopher Columbus, who committed such horrible acts against the Taínos, received a holiday.

The popular People vs. Columbus, et al. lesson by Bill Bigelow (published in Rethinking Columbus) also gets students to think about colonialism and imperialism beyond Columbus. Here are stories from teachers who have used the lesson.

One of my students returned to visit me last month to inform me that because of partaking in this lesson last year, he joined an online group advocating the end of Columbus Day. I was impressed to have a 10th-grade student not only take a firm stand on something, but actually take action to incite change. Another of my students said that this “was the best lesson I ever learned because it helped me believe that there is ‘real’ history I can learn from.” — Sara Pierce, High Language Arts/English Teacher, Hollywood, Florida

The People vs. Columbus, et al. trial has been my most successful and popular lesson in the two years I taught it. Not only do students get to learn the extent of the atrocities committed by Spanish colonizers, but they get to engage in higher order thinking on the factors that cause historical atrocities to occur.

They get excited about it, too ― I’ve had students leap up in the trial, hollering their positions to each other in attempts to convince a jury of their peers. At the end of the trial this year, as the jury came back with the verdict, one of my students reflected, “I think that Columbus is like Trump, and the Taínos are like the Mexican people…” This prompted a discussion about how colonial-type oppression works in our current society, leading one student to observe, “You know, I think WE live within a system.” I asked them if they thought that they had any agency within the system, and they had a really thoughtful conversation about it.

Your resources truly fill a well left dry ― not by forgetfulness, but by the same racist systems that perpetuate the injustices my students face on a daily basis in schools. — Lena Amick, Social Studies Teacher, Baltimore, Maryland

Teaching Activity. By Bill Bigelow. Rethinking Schools. 9 pages.
A trial role play asks students to determine who is responsible for the death of millions of Taínos on the island of Hispaniola in the late 15th century.