On May 15, 2010, the Zinn Education Project was pleased to participate in A People’s Celebration of Howard Zinn held at the Old South Church in Boston, Massachusetts.

Lauren Cooper, coordinator for the Zinn Education Project, was one of the speakers. Others included Bob Moses, Student Non-violent Coordinating Committee (SNCC) and founder of The Algebra Project, Mariama White-Hammond, Executive Director of Project HIP HOP (Highways Into the Past – History, Organizing, Power), Mike Prokosch, staff member of Community Labor United, Myrna Morales of the Progressive Librarians Guild, Michael Spinnato, member of Iraq Veterans Against the War and Veterans for Peace, and many more.

Donations received over the event expenses were donated to the Zinn Education Project, raising $1000 for our work.

Talk by Lauren Cooper for the Zinn Education Project

Thank you. I’m thrilled to be sharing this day with you all, remembering Howard Zinn, and paying tribute to his life and work.

Upon the passing of Howard Zinn, Naomi Klein said, “We have lost our favorite teacher.” Hearing her say this, I knew she was speaking to me, to teachers, to students, to activists, to past and future generations — to all of us.

What makes a favorite teacher? The one who engaged us with stories, readings and discussion; the one who pushed us to think — critically — widely, sometimes challenging what we accepted as true, herself right along with us. The one who took notice that we existed and made sure we noticed, too. The one who saw that maybe we were more than what was written in our student files, more than what appeared on the surface;  just like history and Howard Zinn-there were actions, reactions and inactions behind who we were, decisions and indecisions, depths and back stories  all culminating in what makes us who we are today. And, what will shape our future.

When Howard Zinn passed away, the Zinn Education Project invited people to submit remembrances and how they first heard of Howard Zinn. We received one from a Social Studies teacher, John Mistilis in Oxford, Mississippi:

I was introduced to Howard Zinn by accident. I turned on C-Span Book TV and after a few minutes I thought, ‘Who is this guy? Why have I never heard of him? Why is he not the president?’ I immediately went out and bought his book and my life as a teacher, as an American, and as a human was changed forever.

The impact Howard Zinn has had and continues to have on generations of people is astounding, and we are working to further the teaching of a people’s history for new generations.

I’m Lauren Cooper, I work for Teaching for Change and am one of the coordinators of the Zinn Education Project. Working on this project has been such a gratifying experience. 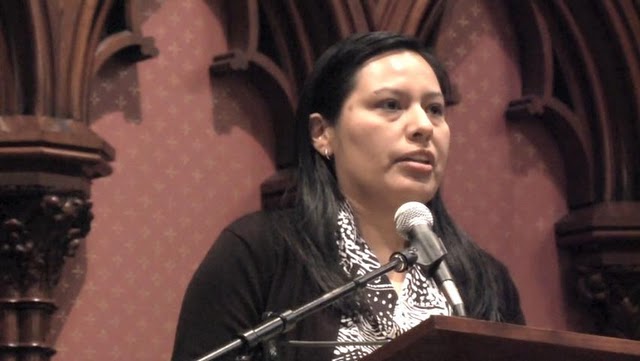 I am an American Indian, born and raised in Phoenix, Arizona — a state with the third largest Indian population in the United States. I’m half Akimel O’Odham from Arizona, and Muskogee from Oklahoma. Oklahoma has the highest population of Indians in the United States. So, of course, I’m familiar with seeing Indians on a daily basis. However, I can recall growing up, being Indian in Phoenix, sitting in an American History class and thinking how ironic it was to be a Clarendon Middle School “Comanche” and reading a couple of paragraphs about some Indians who came and went during the westward expansion, when clearly, we Indians were sitting right there in the room, yelling in our head “Hey! We’re right here. We’re still alive!” But of course, I never said anything; having just read about how the Indians lost, or foolishly gave up their land for pennies or beads, or how they couldn’t defend themselves against the mighty U.S. military. Who wants to be associated with that? I would just sit there, waiting for the moment to pass.

When I finally came across a copy of A People’s History of the United States, reading the first chapter, “Columbus, the Indians and Human Progress” had such a profound impact on how I saw myself in the world. I felt this gravity shift of being liberated from years of feeling embarrassed, invisible, living in the shell of a history whose maintenance only seemed to serve…well, not me or those around me. It serves those in power, with something to lose; and not us with something to gain — dignity and presence.

The disparity between knowing what I knew, and what was being taught, and wanting to find a voice, led me to do my undergraduate studies on the theme of media studies: struggle and resistance. Singing “Ain’t Gonna Let Nobody Turn Me Around” at the People’s Celebration, led by Paula Elliott. Credit: Charngchi Way/Susie Husted.

After graduation, I worked a few years at an alternative newsweekly in Phoenix; then four years in San Francisco promoting and marketing independent magazines; and now at Teaching for Change in Washington, D.C.

Part of my work is being one of the coordinators of the Zinn Education Project. Our goal is to introduce students to a more accurate, complex, and engaging understanding of United States history than is found in traditional textbooks and curricula. The Zinn Education Project is a collaboration between two non-profit organizations — Rethinking Schools and Teaching for Change. Rethinking Schools and Teaching for Change have been long-time collaborators to improve education.

In late 2007, both organizations received a phone call from a guy named Bill Holtzman in California. He had just watched the Zinn documentary You Can’t Be Neutral on a Moving Train. Bill was a former Boston University journalism student and had a professor who had inspired him and challenged him. His professor was Howard Zinn. Bill recalled attending Zinn’s lectures in the 1970s. He marveled at how Zinn’s “people’s history” was so much more alive and accurate than the traditional history he had received in high school.

After earning a financially successful living in technology, he wanted to give something back, do something for the greater good. He wanted to bring Zinn’s work to a new generation of students. So he contacted Howard Zinn who put him in touch with us.

In the Spring of 2008, with Bill’s generous donation, Rethinking Schools and Teaching for Change partnered again to produce and offer a unique educational packet, which included the DVD You Can’t Be Neutral on a Moving Train, a copy of A People’s History of the United States, and a teaching guide developed especially for this project called A People’s History for the Classroom. We put the word out and shipped 4,000 packets — for free — from our warehouse in D.C. to educators across the United States and the territories.

Teachers were so grateful. Some sent us comments including Nancy Jean Smith from Stockton, California:

Thank you so very much for sharing Zinn’s materials with us. We badly need to get a message of advocacy and action into our communities and into our hearts. Your support makes this easier, in a fight that feels overwhelming …

We weren’t sure what direction the project would take next, but we knew the 4,000 packets was a springboard for something much larger. We conducted a follow-up survey to find out what else teachers needed to help them bring a people’s history to the classroom.

The response was: more teaching activities and resources.

So we created a new website at zinnedproject.org, which launched in December 2009. This website is searchable by theme, by time period, and features over 75 downloadable teaching activities — all for free.

Last month we solicited “teaching outside the textbook” essays, detailing how teachers bring a people’s history to the classroom and the impact this has had on their students. We received nearly 100 responses. In one submission, Laura Bennett from the Bronx wrote:

Using Howard Zinn in my classroom as had a profound impact on my teaching. At first, students are angry and feel cheated — why hadn’t they learned any of this sooner? Why had they always been taught something different? Was I the one lying to them? After the initial shock, they begin to digest the material and the students begin to see history in a more realistic way… [Students] never thought history could be so exciting – passionate, tragic and everything in between… History becomes real and something they are involved in rather than some ancient topic that has nothing to do with their lives today. It inspires them to believe that one person can truly make a difference, and that person could be them.

We will post some of the stories online to inspire others to teach a people’s history.

Moving forward, we will launch a media campaign and raise funds to:

What you can do to help:

Spread the word! Help us build this movement by:

And remember: A people’s history is not just for teachers — it can be used by activists and students as well. Use the site to find a new film to screen at your next Labor History film night or if you are doing a research paper on Helen Keller or Sacco and Vanzetti.

Some 30 years after his exposure to Howard Zinn’s “people’s history,” the former Boston University student who initiated this project demonstrates that classroom experience can have a lifelong impact. Please join us in advancing teaching a people’s history and creating more favorite teachers across the country. 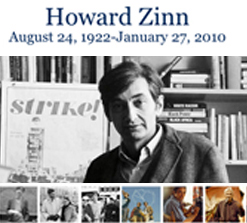 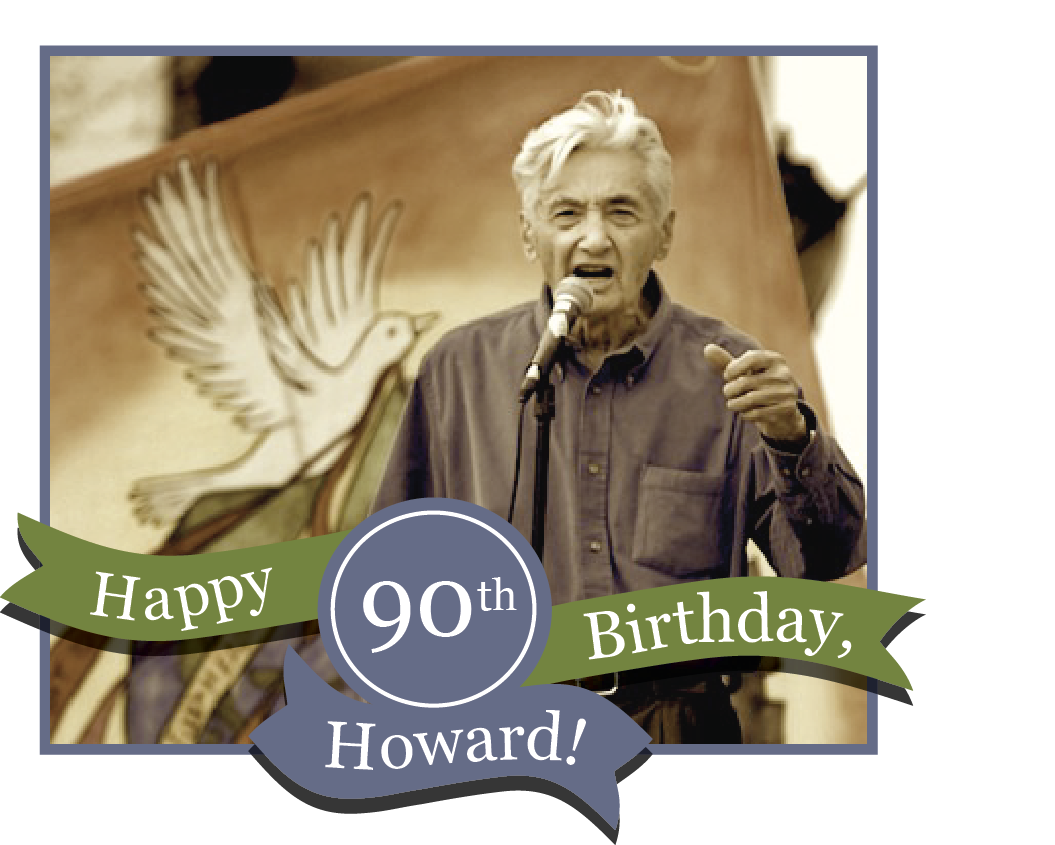 Howard Zinn at 90 — Lessons from the People’s Historian

Article. By Bill Bigelow. If We Knew Our History Series.
Howard Zinn did not live to be 90, but the wisdom that Zinn offered educators lives on and on.