Maya Angelou—poet, author, and activist—died on May 28, 2014. As noted in the Democracy Now! broadcast, “A Peace Warrior”: Poet, Civil Rights Activist Maya Angelou Remembered by Sonia Sanchez, Angelou’s activism is not nearly as well known as her books. Yet, as poet Sonia Sanchez explained, “there was no separation for us between our art and activism at all.”

In the 1960s, Angelou was active in the modern Civil Rights Movement, joining marches and raising needed funds along with other performers such as Harry Belafonte. 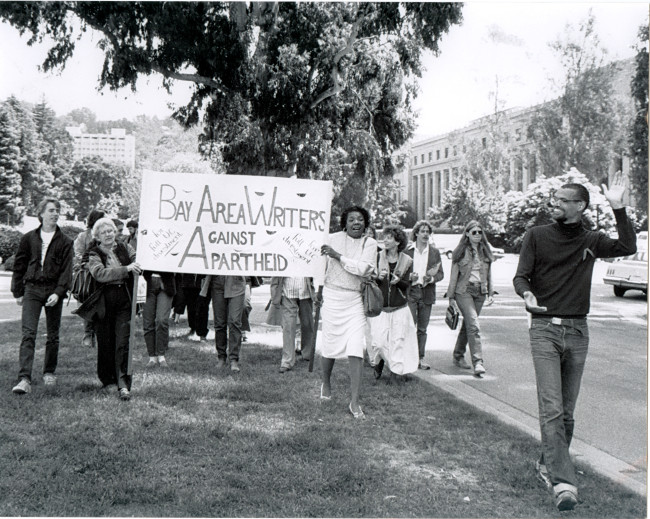 Tillie Olsen and Maya Angelou leading a march of Bay Area writers in April of 1985 to demand U.C. Berkeley divest from the apartheid government of South Africa.

In the 1980s, Angelou protested the U.S. role in apartheid South Africa. The photo above was taken shortly before she was arrested along with Tillie Olsen, Alice Walker, Susan Griffin, and many others in U.C. Berkeley’s Sproul Hall.

Our thanks to the Tillie Olsen family for use of the photo.