“It is one of the best seminars I have ever attended,”
said Sara Quezada, a teacher at South El Monte High School in California.

“It was honestly inspirational,” said educator David Benson, who teaches at Colorado Springs School in Colorado and lauded the sense of place he gained from the seminar. “I’ve always enjoyed teaching about the Civil Rights Movement, but after going to Birmingham and seeing the places where things happened and then meeting the people who were involved and getting to actually talk to them and hear their stories, I was motivated to do a lot more with my students on this topic.”

Quezada and Benson were two of 16 educators referred by Rethinking Schools and Teaching for Change’s Zinn Education Project along with colleagues across the nation for the Civic Voices’ International Democracy Memory Bank Project. Civic Voices, administered by the American Federation of Teachers Educational Foundation (AFTEF), and funded by the U.S. Department of Education, is an “international civic education exchange program that involves teachers and students from around the world in preserving the legacy of their countries’ democratic struggles.” The Zinn Education Project was thrilled to introduce this extraordinary opportunity to educators. The highlight for them was a three-day seminar in Birmingham, Ala., in the fall of 2011.

While in Birmingham, fellows met veterans of the Civil Rights Movement and scholars, including: 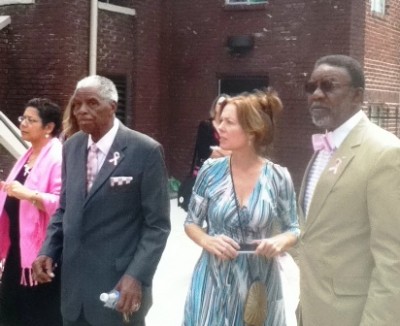 Fellows also had the opportunity to conduct oral history interviews with local activists in the modern Birmingham civil rights movement. “The interviews with local activists were inspirational as well as humbling,” Quezada testified. “To hear these individuals retell their stories was empowering on many levels. First, most of the individuals were unassuming about their roles as activists. They were simply moved by the devotion to their moral allegiance to justice and equality. I was inspired by their courage despite their cognizance of the life-threatening adversities they faced.

“It seamlessly fused the importance of practicing democracy with the scholarly historical role models who have laid the path. Excavating stories of local activists reinforces the students as empowered agents of positive change in our community.”

Similarly, Julian Hipkins, who teaches history at Capital City Public Charter School in Washington, D.C., explained that by going though the process of interviewing others and visiting historic sites, he learned invaluable lessons on how to teach the process to his students. “I will be able to explain with great detail aspects of the movement and Birmingham that would be very difficult to learn from a book,” he said. 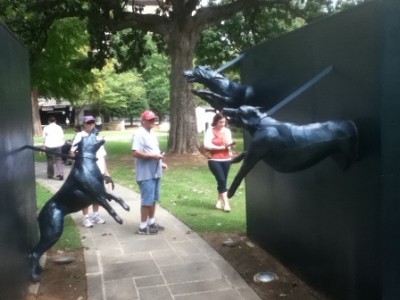 Teachers visit a statue in Kelly Inghram Park, which is full of powerful memorials to the Children’s Crusade of 1963. Photo by David Benson.

Other sessions showed teachers how to contribute student-conducted interviews to the International Democracy Memory Bank, which is accessible worldwide, and how to develop an oral history rationale and methodology. Caroline Hay, who teaches at Tualatin High School in Oregon, said that although the meetings with local activists related to the Civil Rights Movement were extremely useful in terms of class curriculum . . . most helpful were the sessions on how to do oral history and how to contribute to the Memory Bank.”

Educators also commented on the best practices exchanges that took place by meeting other teachers, and the impact that such exchanges had on their long-term perspectives and curriculums. “This was a very important part of the process,” explained Benson. “I’d never been to the South before and it was a great experience for me to make friends amongst these teachers and share ideas. Some of the best conversations came in the informal moments—dinners out with a variety of teachers from all over the country.” Benson expressed regret that he was not able to keep in touch with other teachers and suggested a teaching exchange in which the same group would meet again in order to form deeper connections. Educator Terry Boler, who teaches at Lewisburg High School in Mississippi, has been able to continue these relationships on her own. “I met a teacher from south Mississippi who has been interviewing civil rights activists for years who helped a lot,” she said. “I also have kept in contact with Kristen Taylor from Baltimore and she is keeping me informed about her further involvement with Civic Voices. This interaction keeps history fresh and allows students to feel the passion you have for the content.” 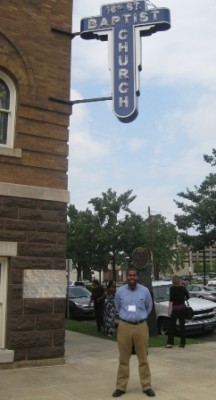 Hipkins spoke of the sense of kinship he gained from being introduced to these teachers. “Meeting other teachers from across the country gave me a sense of belonging to a large community of educators all working towards the same goal,” he stated. “I especially enjoyed speaking with teachers who use people’s history lessons . . . and hearing how teachers adapted lessons from the Zinn Education Project for their students.”

Quezada gained insight into teaching conditions across the country from her colleagues. “I am glad I live in California,” she said. “I appreciate the freedom we have as teachers and as union members. Learning about the growing systemic challenges teachers around the country face was appalling and discouraging. I applaud my colleagues for having the temerity to challenge the onslaught of mind-numbing educational policies as well as the financial lacerations with their commitment to the progressive educational curriculum we received at the seminar. I can’t imagine working in the type of repressive and dehumanizing conditions many of my colleagues faced.”

During the past school year, participants have incorporated Civic Voices into their curriculum as much as possible. “Last semester, after I returned from the seminar, I spent nine weeks on the Civic Voices project,” Boler recounted. “It was amazing. It was a new way of learning and took the students a few weeks to get into but was such an enriching experience for them. Journalist Jerry Mitchell had referred me to the William Winter Institute at Ole Miss for help with the project and they were great, providing instruction and equipment for the interviews. We had a difficult time at first finding interviewees but were pleasantly surprised by the response when we asked administrators and teachers for help. The project is complete except for the uploading, which I plan on doing over the summer.” Hay also was able to implement the Civic Voices curriculum in her classroom, and so far her students have conducted, transcribed, and submitted two interviews to the Memory Bank.

Other teachers are still in the process of executing the project. “We are about to start our first Civic Voices project—interviewing one of our community’s most important civil rights activists,” Benson explained. “I’m still trying to wrap up our plans on how to connect with him.” Although their district pacing plan has slowed Quezada’s students, “I have already laid the foundation by reading Thoreau’s On Civil Disobedience, excerpts of Paulo Freire’s Pedagogy of the Oppressed, and the documentary on the banning of ethnic studies in Arizona, Precious Knowledge. My intent is to bring labor organizers, environmental activists, as well as educational activists into the classroom.”

Educators spoke enthusiastically of curriculum’s impact on their students. “I think it is invaluable having students interact on a personal level with older people who have been active in their community,” stated Boler. “The relationship they develop with the interviewees creates a responsibility as citizens in them and prepares them for the future.” Quezada observed shifts in her students’ attitudes “based on their emerging conscientization, or conscientização. I have witnessed a growing awareness of their surroundings and the challenges that they face,” she described. “Interviewing activists could serve as the inspiration to further concretize their role as activists.” Said Benson, “[The students] are more engaged, because I’m more passionate about the topic. One student even told me that it seemed as if I had been there!”

The Birmingham seminar was one of several that have been conducted during the course of the three-year Civic Voices project. Similar trainings and seminars in which teachers explore people-driven movements first-hand have also occurred in all seven of the other countries in which Civic Voices is active: Colombia, Georgia, Mongolia, Northern Ireland, the Philippines, Poland, and South Africa. Students in all these countries are also gathering oral history interviews, which are all posted onto the Civic Voices website. The website contains nearly 400 of these complete interviews, but also offers teacher-developed classroom resources using the best of the interviews the project has to offer. According to Abby Mills, one of the project’s administrators, “The interviews form the basis of teaching materials that challenge students to think about the way in which individuals can make a difference in their societies.”

The Civic Voices website includes a student survey, free teaching materials, an interactive world map of civic engagement, and perhaps most importantly, the International Democracy Memory Bank. Here, student-collected oral history narratives are available in both their video and transcript formats. “The resources . . . are available and free to all educators who visit the site. It’s better to register, because they have access to more resources, but there are lots of resources on the site you don’t need to register for as well,” clarified Mills. The resources use the personal stories contained in the interviews to explore key civic concepts such as rule of law, consent of the governed and freedom of speech from a comparative perspective.

An accompanying site, Voices for Peace, uses the Civic Voices interviews to explore the strategies activists have used to effect change within their communities and how those strategies are combined to build effective social movements. This website provides a Teacher’s Guide, Listening Guides, and space for user feedback. It also includes Reflections, or handouts for organizing discussions around different strategies for change, as well as handouts showing the comprehensive strategy for nonviolent change set forth by the U.S. Civil Rights Movement. The Voices for Peace site is free with no registration required.

Educators who completed interviews from all eight partner countries participated in a teacher exchange in early May, leading up to a final showcase event at the U.S. Institute of Peace in Washington, D.C. Four educators from each of the partner countries joined with U.S. peers to visit Birmingham, Ala.; Washington, D.C.; and New York City. They studied the history of the Civil Rights Movement, as well as educational and governmental institutions within the United States. Their agenda included tours of Congress, school visits, and other opportunities to see sites of cultural and historical significance. “The final showcase celebrated the accomplishments of the teachers and students around the world who have participated in the project,” Mills explained.