Every week we hear from people who say, “I am not a teacher, how can I promote people’s history in schools?”

In response, we compiled this list of various ways to support and advocate for the teaching of people’s history in K-12. We update the list periodically with specific campaigns, such as the one referenced further below in Arkansas.

The Reconstruction era is full of powerful examples of how interracial grassroots alliances came together in the aftermath of the Civil War to redefine citizenship, expand voting rights, and change laws that institutionalized discrimination. The centuries-long struggle for the vote is similarly powerful and inspiring, and necessary, as voter suppression once again corrupts our electoral process.

Yet many in the United States don’t understand this history — or how they, too, can work toward a more perfect union — because it is often left out or rushed through in textbooks, curricula, and classrooms. Students exposed to this history at all are often given an imbalanced view that emphasizes the violent white supremacist backlash over the important victories of Black activists and their allies during Reconstruction. 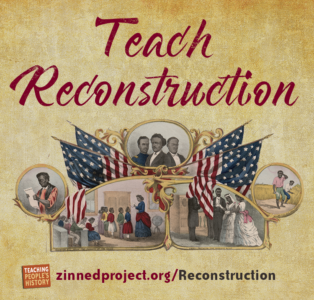 This emphasis deprives students of the opportunity to appreciate and learn from the successes and examples of Reconstruction while simultaneously obscuring the causes of the Jim Crow regime that followed.

Vote for the Zinn Education Project at CREDO

The Zinn Education Project is one of CREDO’s grant recipients for the month of May. This can make a huge difference. Funding from CREDO will allow us to engage more teachers in our Teach Climate Justice, Teach Reconstruction, and Teach the Black Freedom Struggle campaigns — and help us offer students a more honest history of our country.

Your vote determines how big of a grant we’ll receive. 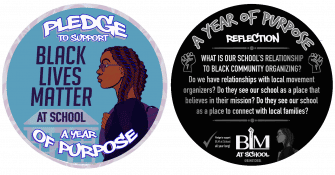 The Black Lives Matter at School movement first started in Seattle during the fall of 2016. It spread to Philadelphia and by the 2017-2018 school year during the first week of February, thousands of educators around the United States wore Black Lives Matter shirts to school and taught lessons about structural racism, intersectional black identities, black history, and anti-racist movements for a nationally organized week of action: Black Lives Matter at School. This commitment to affirm the lives of Black students, teachers, and families has become an annual tradition in Seattle, Philadelphia, Los Angeles, Chicago, Detroit, Boston, New York City, Baltimore, Washington, D.C., and beyond.

Learn about Black Lives Matter at School Week of Action and Year of Purpose. Sign pledge to participate.

Many school districts are in the midst of revising their standards and/or curriculum frameworks for social studies and other subjects. Those revisions usually require public comment. Contact your school board or school district to find out which standards are being revised and the process for public review and comment.

Be the voice in that process to insist that Black history is taught honestly and all year. Find your school district.

In 2017, an Arkansas state legislator proposed a ban on the teaching of any books by Howard Zinn. Thanks to a powerful response by teachers across the state, the bill died in committee.

In 2021, lawmakers in at least 27 states are attempting to pass legislation denying teachers the right to be honest about the role of racism, sexism, heterosexism, and oppression throughout U.S. history. CBS News correspondent Tanya Rivero noted, “Conservative lawmakers are asking the Biden administration to abandon curriculum they say fabricates American history in schools.”

Two new bills were put forward in Arkansas to restrict teaching about race, class, solidarity, and the New York Times 1619 Project. Please call Arkansas representatives to counter these bills. Here is who to call.

The Missouri bill names these leading social justice education groups as those whose curricula would be banned:

1619 Project initiative of the New York Times, the Learning for Justice Curriculum of the Southern Poverty Law Center, We Stories, programs of Educational Equity Consultants, BLM at School, Teaching for Change, Zinn Education Project, and any other similar, predecessor, or successor curricula. The proposed legislation fails to name a single lesson that is inaccurate or that misleads students about U.S. history.

In response to these attacks, the Zinn Education Project offers a pledge for teachers to sign to show their support for each other and their students. Share the pledge with educators.