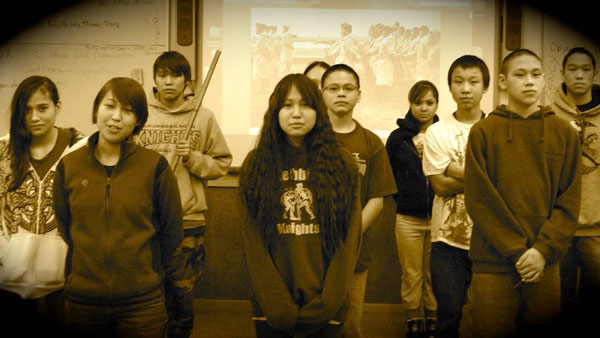 “I am grateful to the Zinn Education Project for keeping the idea of agency alive. My students are Alaskan Natives, and unfortunately are familiar with being on the margins of history textbooks. They become more interested when other groups that share similar struggles are brought to the forefront in lessons.”

With Banned Books Week (Sept. 21-27) in full swing, we call attention to the recent attempts to ban people’s history books and curriculum, and to celebrate the power of learning people’s history.

In 2012, the Tucson Unified School District decided to abolish the highly successful Mexican American Studies (MAS) Program and called for an immediate removal of all program books, including Rethinking Columbus, Pedagogy of the Oppressed, Occupied America, and other people’s history texts. Along with other education groups and activists, we helped amplify this issue, raising awareness about the threat to all people’s history curricula.

In 2013, the Associated Press brought national attention to Indiana Governor Mitch Daniels’ orders to ban the use of not just A People’s History, but any of Howard Zinn’s books in K-12 classrooms shortly after Zinn’s death in 2010. The Zinn Education Project helped expose this attempt at censorship and the need for academic freedom in all grade levels.

In the Winter 2012-2013 issue of American Educator, the American Federation of Teachers (AFT) published an attack on A People’s History. Initially, the AFT refused to publish a response. In March 2014, a year later, thanks to organizing by AFT members, letters to the editor responding to this attack were published. You can read the Zinn Education Project’s 150-word allotted response and the original full response here.

In each case, the Zinn Education Project has been at the forefront of responding to the attacks. We have played a leading role in making these stories public and defending the rights of teachers and students to teach and learn.

Since 2008, we have built a network of 40,000 teachers committed to teaching outside the textbook. For Banned Books Week you can make sure more students read banned books and learn the history missing from textbooks. With your donation to the Zinn Education Project we can equip thousands more classroom teachers to bring people’s history to millions of students.

Show your support…with a button or sticker. Details on donation page.

One comment on “Banned Books Week: Champion the Right to Teach and Learn People’s History”