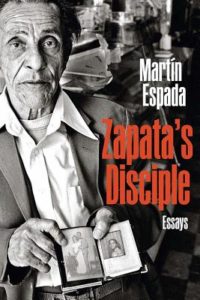 Martín Espada introduces this new edition of his classic essay collection with a story about how Zapata’s Disciple was banned in Tucson when the Mexican American Studies program was outlawed in 2012. He notes: “On the list of banned authors I am keeping company with . . . are some of the finest Latina/o writers alive today. May our words always trigger the sweating and babbling of bigots.” The book is full of poetry and essays that will appeal to high school students: the letter Espada wrote to Nike listing all the reasons “I could reject your offer” to write for their poetry slam; the story of his father, in uniform, being made to move to the back of the bus in Mississippi; the poem about Mumia Abu-Jamal that was banned from NPR. Stunning writing about topics that matter. [Review by Rethinking Schools.]

The ferocious acumen with which the award-winning poet Martin Espada attacks issues of social injustice in Zapata’s Disciple makes it no surprise that the book has been the subject of bans in both Arizona and Texas, targeted for its presence in the Mexican American Studies curriculum of Tucson’s schools and for its potential to incite a riot among Texas prison populations.

This new edition of Zapata’s Disciple, which won the 1999 Independent Publisher Book Award for Essay / Creative Nonfiction, opens with an introduction in which the author chronicles this history of censorship and continues his lifelong fight for freedom of expression. A dozen of Espada’s poems, tender and wry as they are powerful, interweave with essays that address the denigration of the Spanish language by American cultural arbiters, castigate Nike for the exploitation of its workers, reflect upon National Public Radio’s censorship of Espada’s poem about Mumia Abu-Jamal, and more. Zapata’s Disciple is a potent assault on the continued marginalization of Latinos and other poor and working-class citizens in American society, and the collection breathes with a revolutionary zeal that is as relevant now as when it was first published. [Publisher’s description]