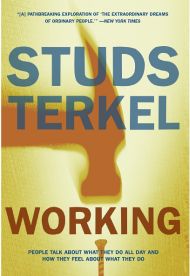 Perhaps Studs Terkel’s best-known book, Working is a compelling, fascinating look at jobs and the people who do them. Consisting of over 100 interviews conducted with everyone from gravediggers to studio heads, this book provides a timeless snapshot of people’s feelings about their working lives, as well as a relevant and lasting look at how work fits into American life. [Publisher’s description.]

From Studs Terkel: Conversations with America

Studs Terkel’s multifaceted life produced an equally rich and varied legacy of research materials. After graduating from University of Chicago’s Law School in 1934, Terkel pursued acting and appeared on stage, in radio, and in the movies. He was a playwright, a radio news commentator, a sportscaster, and a film narrator, and worked as a jazz columnist, a disc jockey, and a music festival host. He even served briefly as a civil service employee but is best known as a radio network personality and as a Pulitzer Prize-winning author of books. His award winning books are based on his extensive conversations with Americans from all walks of life that chronicle the profound and often tumultuous changes in our nation during the twentieth century. On “The Studs Terkel Program,” which was heard on Chicago’s fine arts radio station WFMT from 1952 to 1997, Terkel interviewed Chicagoans and national and international figures who helped shape the past century. The program included guests who were politicians, writers, activists, labor organizers, performing artists, and architects among others. Terkel was remarkable in the depth of his personal knowledge of the diverse subjects explored on his program and his ability to get others to talk about themselves and what they do best. Many of the interviews he conducted for his books and for his radio program are featured here. 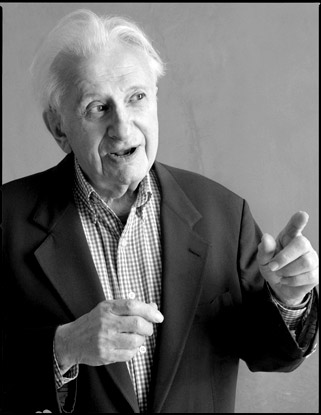 Studs Terkel’s work was highly praised and recognized in the world of arts and letters. He was the recipient of numerous book awards including the Pulitzer Prize for The Good War (1985), the Irita Van Doren Book Award, and two National Book Award nominations. Terkel received the Presidential National Humanities Medal (1999), the National Medal of Humanities (1997), the Illinois Governor’s Award for the Arts, the Clarence Darrow Commemorative Award, and he was cited by the Friends of Literature for his “unique contributions to the cultural life of Chicago.” His radio programs were honored with the Prix Italia, three Ohio State Awards, three Major Armstrong Awards, and the George Foster Peabody Award for The Studs Terkel Program (1980). He was also the first Distinguished Scholar in Residence at the Chicago Historical Society.