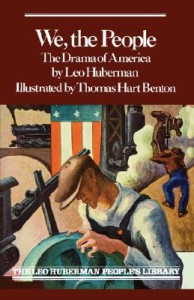 “The Drama of America” is truly to be found between the covers of this classic book — an exhilarating, entertaining, and often tragic account of a nation and the struggles of those caught up in the processes of its becoming, written by Monthly Review co-founder Leo Huberman. A precursor to Howard Zinn’s A People’s History of the United States, and, like that book, immensely popular upon its release, We, the People recasts U.S. history from the perspective of those far removed from official power: the anonymous toilers so often ignored by conventional histories. These are the men, women, and children who cleared the land and worked its fields, built and inhabited the factories, moved goods along the railways and canals and highways, and raised the next generation of workers whose exploited labor would propel the nation’s development.

Huberman begins with the European colonization of North America and traces the story through the Great Depression and start of the New Deal. Originally conceived for a younger audience but later re-written for adults, We, the People pays special attention to the economic development of the U.S. and its long-term historical trends in a way that is clear and accessible. Huberman’s lucid text is accompanied by numerous extracts from primary sources, charts and diagrams, and powerful illustrations by the painter and muralist Thomas Hart Benton. [Publisher’s description.]