Walkout is the stirring true story of the Chicano students of East L.A. who, in 1968, staged several dramatic walkouts in their high schools to protest academic prejudice and dire school conditions.

Aided by a popular and progressive young teacher, Sal Castro, Paula Crisostomo and a group of young Chicano activists battle parents, teachers, bureaucrats, the police and public opinion to make their point. Along the way, the students learn profound lessons about embracing their own identity and standing up for what they believe in. [Producer’s description.]

The mass student walkouts this week across California and other states are not the first of their kind. In 1968, Chicano students in East Los Angeles staged a historic walkout in their high schools to protest academic prejudice and dire school conditions.

Students were forbidden from speaking Spanish in class or from using the restrooms during lunchtime. Schools taught a curriculum that largely ignored or denied Mexican-American history and Chicano students were steered toward menial labor and away from college by counselors and school officials. 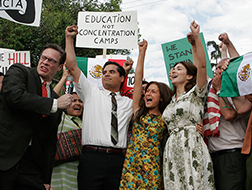 In March 1968, the students decided to take a stand against the injustice and staged walkouts in schools across L.A. Many date the modern Chicano movement to the walkouts when some 20,000 teenagers took to the streets

Many of the students who participated in the walkouts went on to successful careers in politics, academia and the arts. One of them was Antonio Villaraigosa — he became the mayor of Los Angeles. Another was award-winning filmmaker Moctesuma Esparza, who was indicted for his role in organizing the walkouts. He is now executive producer of the HBO film about the 1968 protests simply titled Walkout.

Teaching Activity. By Brian C. Gibbs. Rethinking Schools. A teacher uses the activist history of Theodore Roosevelt High School in East Los Angeles to pose students the question: “What would you be willing to do to create change?"

Teaching Activity. By Gilda L. Ochoa. Rethinking Schools. Reflections on teaching students about the 1968 walkouts by Chicano students in California.