The 1930s were a crucial period in shaping the labor movement that exists today. In this activity, students meet three union activists, all women, and have the benefit of their hindsight in looking back at the 1930s.

In the Academy Award-nominated Union Maids, the women’s own lively stories are combined with rare newsreel footage and music of the time. This is a valuable film for students to feel the vitality of labor organizing in the 1930s.

Through the film and activity, students will see some of the conditions that gave rise to the growth of the Congress of Industrial Organizations (CIO) in the 1930s; examine the reasons why some people choose to dedicate their lives to organizing other workers; and question why labor unions were so strenuously opposed by some employers and governmental agencies in the 1930s.

Features the oral histories of 3 women labor activists involved in the workers’ movements in the early 1930s: Kate Hyndman, Stella Nowicki, and Sylvia Woods. The women are figures of dignity and beauty amid their experiences of social injustice.

Nominated for an Oscar in 1978 for best feature documentary, and winner in 1978 of the French Syndicate of Cinema Critics’ “Critics Award” for Best Short. Unit IV: Our Own Recent Past 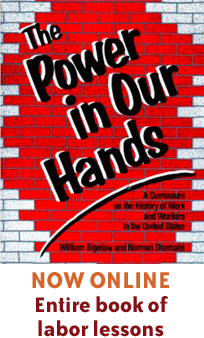