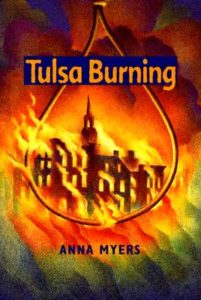 The day he buried his pa, Nobe Chase lost everything–his father, his home, and his dog, Rex. Worst of all, he had to move into town to live with Sheriff Leonard’s dog killer, wife stealer, and secret law-breaker of all sorts.

That day, Nobe found a new purpose for his life’s revenge. Hate takes over his life, burning out of control inside him. Nobe learns how dangerous hate can be when it is unleashed in a fury of fire and gunpowder during a race riot in nearby Tulsa. When the violence spills over into his hometown, Nobe must decide what kind of man he is going to become–one driven by vengeance or one driven by courage.

Based on true events in Tulsa, Oklahoma, during May of 1921, Anna Myers has produced a powerful novel of historical fiction about a young man who must wrestle with his past and find the strength to pull free from the poisonous grip of hatred and abuse. [Publisher’s description.]

“In this emotional page-turner, Myers expertly captures an era of poisonous racism while conveying the strong, true voice of a courageous young man.” — Booklist (starred review)

“A love interest, a wise and wily sheriff’s wife, and an airplane ride flesh out this gripping novel. . . . [T]his absorbing book is excellent for group discussions.” — School Library Journal

“Descriptions are poetic and vivid; the narrative is deep and soulful.” — Kirkus Reviews