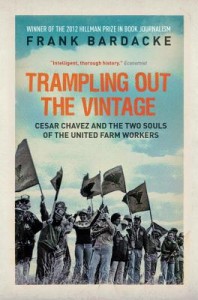 In its heyday, the United Farm Workers was an embodiment of its slogan “Yes, we can” in the form “¡Sí, Se Puede!” winning many labor victories, securing collective bargaining rights for farm workers, and becoming a major voice for the Latino community. Today, it is a mere shadow of its former self.

Trampling Out the Vintage is the authoritative and award-winning account of the rise and fall of the United Farm Workers and its most famous and controversial leader, Cesar Chavez. Based interviews conducted over many years — with farm workers, organizers, and the opponents and friends of the UFW — the book tells a story of collective action and empowerment rich in evocative detail and stirring human interest. Beginning with the influence of the ideas of Saul Alinsky and Catholic Social Action at the union’s founding, through the UFW’s thrilling triumphs in the California fields, the drama concludes with the debilitating internal struggles that effectively crippled the union.

A vivid rendering of farm work and the world of the farm worker, Trampling Out the Vintage is a dramatic reappraisal of the political trajectory of Cesar Chavez and the United Farm Workers and an essential re-evaluation of their most tumultuous years.

Winner of the 2012 Hillman Prize in Book Journalism. [Publisher’s description.]