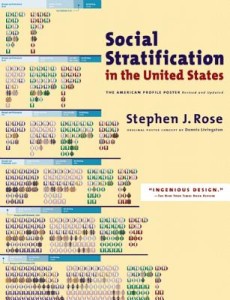 Generations of teachers, union organizers, and activists have relied on this book-and-poster set, originally published in 1979, to illustrate the magnitude of America’s economic divide — which has only grown ever since. This completely updated edition, drawn from the 2005 Current Population Survey of the U.S. Census, brings together fresh primary data to provide a clear — and “eye-opening” (Chicago Tribune) — picture of the U.S. social structure.

Folded inside the companion booklet, the poster depicts color-coded figures that make it possible to compare social groups at a glance and to understand how income distribution relates to race, sex, education, and occupation. With charts and careful explanations, the booklet shows how to make the most of the poster in the classroom and beyond, and reveals the considerable changes in America’s social landscape over the last few decades.

Rose’s latest findings reveal that recent economic growth has mostly benefited the wealthiest households, that the term “middle class” has lost most of its meaning, that a gender gap persists in the workplace, and that, on average, African Americans and Latinos still earn far less than other Americans. Bringing to life the dry statistics underpinning our discussions of inequality, Social Stratification in the United States is, in the words of Barbara Ehrenreich, “a unique achievement.” [Publisher’s description.]

Stephen J. Rose is a senior economics fellow at Third Way: A Strategy Center for Progressives. He previously served in a number of research and policy positions at the Department of Labor, the National Commission for Employment Policy, the Joint Economic Committee of Congress, and the Educational Testing Service. He lives in Washington, D.C.