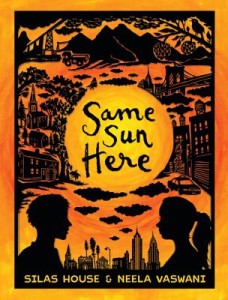 Two twelve-year old students, River in the mountains of Kentucky and Meena in Chinatown, New York, become pen pals. Both prefer old-fashioned snail mail, allowing the reader to savor their long, journal-like letters. River writes about how his family and community are being destroyed by mountaintop removal. He is being raised by his Mamaw (grandmother), who is an outspoken activist fighting to protect jobs and the environment. As River explains to Meena, who remembers the mountains in her home country of India but has never heard of mountaintop removal, “Mamaw said if a place has coal and poor people, then the coal companies will take it out any way they can and don’t care what happens to the people.”

Meena writes back that it sounds like what happened to her parents’ village when a dam was built in India, now “tourists come and rent boats that bob up and down in the water. They pose for pictures above the spot where our village used to be.” Meena’s letters chronicle the challenges faced by many new immigrants in school, housing, legal status, employment, and overall human rights.

While the book teaches the reader a lot, it manages to do so without being preachy or didactic. In fact, the authors do such a good job that at times you will be convinced you stumbled across a packet of real letters. [Description by Rethinking Schools.]