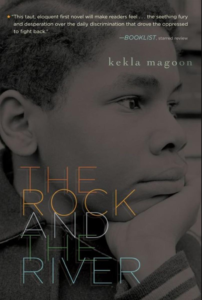 In 1968 Chicago, it’s not easy for thirteen-year-old Sam to be the son of known civil rights activist Roland Childs. Especially when his older brother, Stick, starts keeping to himself. Then, one day, Sam finds something under Stick’s bed that changes everything: literature about the Black Panthers. Suddenly, nothing feels certain anymore.

And when Dr. King is shot and killed, Sam’s father’s words are no longer enough to make him believe in change.  This moving, coming-of-age story gracefully encompasses the scope of the struggle between the civil rights and black power movements through an intimate and relatable lens. [Publisher’s description.]

“Magoon’s first novel shows movingly how the two sons of a civil rights leader come to bear the cost of the struggle. In the fictional, but convincingly detailed, world of the book. . . the younger boy, Sam — not sure what or whom to believe — tells the story and has to decide how it will end.” — The New York Times Book Review

“As it stands, Kekla Magoon’s book is an original. There are few enough books out there like it, and I think we have room in this world for more. A smart, sensible, deeply layered title. A necessary addition to our shelves from a time period too often colored in black and white terms.” — Elizabeth Bird, A Fuse #8 Production

“True to the young teen’s viewpoint, this taut eloquent first novel will make readers feel what it was like to be young, black and militant 40 years ago, including the seething fury and desperation over the daily discrimination that drove the oppressed to fight back. . . An important title for YA American History classes.” — Hazel Rochman, Booklist, starred review

“Magoon portrays well the tension between the Panthers and the Civil Rights Movement. . . This is an important book about a historical reality that has not been dealt with in juvenile fiction.” — School Library Journal

“This compelling debut novel set in 1968 Chicago vividly depicts how one African-American family is torn between two opposing approaches to the Civil Rights Movement. . . Magoon is unflinching in her depictions of police brutality and racism. She offers readers a perspective that is rarely explored, showing that racial prejudices were not confined to the South and that the Civil Rights Movement was a truly national struggle.” — Kirkus Reviews